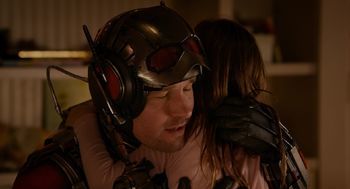 "This is your chance. To earn that look in your daughter's eyes. To become the hero she already thinks you are."
Nebula: All you do is yell at each other. You're not friends.
Drax: You're right. We're family. We leave no one behind.
— Drax defines the Guardians' relationship to Nebula, Guardians of the Galaxy Vol. 2.
Advertisement:

In a universe full of traumatic origin stories, ancient conspiracies by neo-facists and undead assassins, and a madman plotting to wipe out half of life in the universe, there is more than danger and trauma. There are people coming together to do what's right.