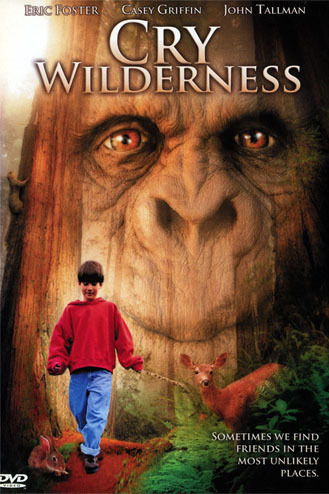 Cry Wilderness is a 1987 family adventure film about a boy named Paul who befriends Bigfoot one summer and is encouraged by Bigfoot to journey to the mountains and help his (Paul's) father.

Paul is not understood by his teacher at his boarding school, who grows weary of Paul's somewhat ridiculous sounding stories about meeting Bigfoot and giving him Coca-Cola. One night, Bigfoot drops by Paul's school to warn Paul that Paul's father, a forest ranger, is in some sort of danger. Paul leaves school and makes the trek to the national forest his dad maintains. Paul joins his dad, his Native American friend Jim, and an Egomaniac Hunter named Morgan to find an escaped tiger in the forest. But once Paul lets it slip that he knows Bigfoot, what'll happen next? (Especially with greedy Morgan with them?)

This is the setup for a rather obscure movie with a very incoherent and confusing plot and copious amounts of Stock Footage. It's telling that this movie didn't even get a page on this very wiki until it was the subject of an episode of the reboot of Mystery Science Theater 3000. Tropes from said episode can be found here.

Tropes found in this movie include: