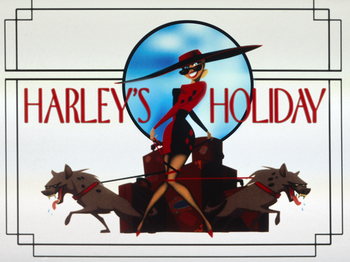 Harley Quinn is pronounced sufficiently cured to be released from Arkham Asylum. Batman solemnly congratulates her, and she assures him that she intends to put crime behind her.
Advertisement:

Out on the streets, she alarms people by walking her hyenas, but stays out of trouble. Deciding that she needs to update her wardrobe, she stops in a clothing store (bumping into Bruce Wayne in the process) and picks out a dress. Unfortunately, she hurries off with it right after purchasing it, not waiting for the clerk to remove the anti-shoplifting tag. A guard tries to get her attention, but this scares her and she starts running. When the store alarm goes off, she decides that people are still chasing her as a criminal, so she flees in a stolen car—which happens to belong to Bruce, and is carrying both a Batman-issue tracking device and Bruce's shopping companion, Veronica Vreeland.

Batman and Robin try to catch up to Harley while there's still hope of straightening out the mess. Harley leads them on a chase as she heads for Boxey Bennett's place to seek help getting out of town. Bennett turns against Harley when she rejects their plan to hold Veronica for ransom, and a fight breaks out between the gang, Harley, and the heroes. Meanwhile, Harvey Bullock gets drawn into the chase, and Veronica's father General Vreeland shows up in a tank.

The chaos ends with a car-truck-tank pileup, and Harley is captured and returned to Arkham. However, Veronica Vreeland declines to press charges, since the kidnapping was accidental and Harley meant no harm, so she has a good chance of getting out again. Batman shows up with Harley's dress (she did pay for it, after all) and wishes her luck in turning her life around. She gives him a peck on the lips, then a big long kiss as Robin and Poison Ivy look on bemusedly.