Anime / Yo-kai Watch Jam The Movie: Yo-kai Academy Y - Can a Cat be a Hero? 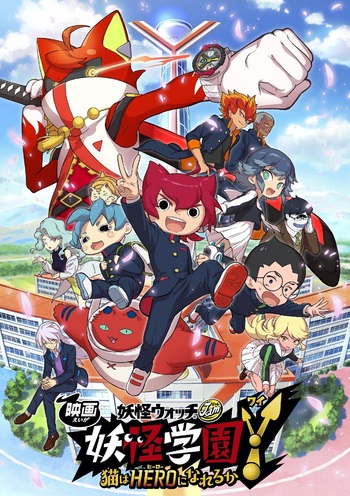 Yo-kai Watch Jam The Movie: Yo-kai Academy Y - Can a Cat be a Hero? is the sixth film in the Yo-Kai Watch franchise. It comes out in Japan on December 13, 2019.

Unlike the previous films, this film takes place in its own continuity. It's the first film in the Yo-Kai Watch Jam sub-brand, which exists to expand the series beyond its normal mon genre.

The plot of the film involves humanized versions of various youkai going to school together. Jinpei Jiba, Sandayu Koma, Mera Raidou, Fubuki Himegawa, and several other characters go to Y Academy together. While there, various hijinks happen.