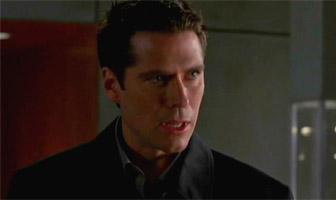 "I'm... Angel. The vampire with a soul. Fighting for my redemption with — with — with killing evil demons. That's right."
Angel and Gunn prepare to storm Wolfram & Hart's fortress, where Angel is convinced Darla is hiding. He is intercepted by Cordelia and Wesley, who refuse to let him go through with his suicidal plan. At a loose end, everyone winds up at Caritas to consult with The Host, who refers Angel to a swami who lives in Ojai.
Advertisement:

A shifty person arrives at the office looking for Angel. He pulls a gun on Cordelia and threatens to kill her if she doesn't produce Angel. Wesley hears this from the next room; In the spur of the moment, he throws on Angel's coat and strides inside, introducing himself as Angel. The goon takes Wesley to meet his boss, Magnus Bryce. Somebody, probably a business rival, has been threatening his daughter, and he needs "Angel" to act as her bodyguard. Meanwhile, Angel (the real one) makes his sojourn to see the swami. The door is answered by a not-at-all swami-like, paunchy middle-aged man.

"Angel" is introduced to his employer's daughter, Virginia, who drags Wesley along on a shopping trip. As predicted, two men accost Virgina in the store. When she drops Angel's name, the men recoil with intimidation. Seems Angel's reputation precedes him. Wes discovers these men work for Paul Lanier, one of Bryce's competitors. Back at the cabin, Magev gets on the dog and bone to speak with someone: it's Lanier. The "Swami" isn't sure how much longer he can keep up this Yoda act. It seems this is an imposter hired by Lanier to keep Angel busy. Lanier is puzzled, having just seen Angel at Bryce's house. Ruh-roh. Meanwhile, Virginia is beginning to find Wesley attractive. Things get hot and heavy; Wesley tries to tell her the truth about who he really is, but ends up going to bed with her.

The next morning, Gunn pulls up to the cabin, having been sent by Cordelia and sent to fetch Angel. The Swami greets him warmly and then knocks Gunn out. Angel witnesses the act from the porch and works out that the real Magev is probably fish food. This imposter taunts Angel, thinking he is safe in the sun, but Angel is quite the fly fisherman and with one cast snags him in the mouth with a hook, then reels him onto the relaxing shade of the porch. Ouch. At Case de Bryce, Bryce storms upstairs and declares Wesley to be a fraud. Seems Lanier made an anonymous call to Bryce, and the jig is up. Virginia is crushed. We later see that Magnus has a sacrificial altar with chains waiting for the guest of honor - Virginia.

Everyone rendezvous back at the hotel, where they begin to piece together what Bryce is up to. Angel says the "Goddess" Yeska isn't really a goddess. She's a demon who grants enormous power in exchange for a tribute - in this case, a female virgin. Lanier was trying to intervene to prevent his rival from achieving his goal. At the Bryce Estate, the party is in full swing. A pair of henchmen grab Virginia and shackling her on an altar, while Magus begins the incantation for Yeska. The Bat Pack storms in as Bryce completes the incantation. Yeska is brought forth, but as she reaches for the sacrifice she senses Virginia is "impure" and...vanishes. Well, that was anticlimatic. Bryce is livid. He accuses Wesley of defiling his daughter. Virginia smugly reveals that she hasn't been a virgin for quite a while, having slept with his chauffeur when she was sixteen, and several other men since then. She decks her father and leaves with Wesley and the others.

Days later at the Hyperion, Angel is sitting at his desk when Cordy bursts in with an tabloid magazine. It seems Virginia has a new "bodyguard to the stars" and Wesley is getting some quality press time, something Cordy hungers for. Angel tries to play it down, but is clearly jealous when the article calls the company the Wyndam-Pryce Agency.