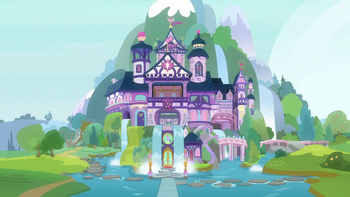 Fillies and gentlecolts, school is now in session!
Pinkie Pie: First day at school! So many new ponies!
Twilight Sparkle: About that. One thing I forgot to mention. It's not just ponies.
Written by Michael Vogel & Nicole Dubuc
Advertisement:

Twilight Sparkle and her friends return from stopping the Storm King from taking over Equestria, and discover the map in her castle has expanded to include the various locations outside of Equestria they had to visit. Twilight realizes there is a larger world of ponies and other species outside of Equestria that could be dangerous, but they could help spread the message of friendship, too. She decides to open a school to help teach this. Princess Celestia agrees with Twilight, but cautions her that she will have to get the school approved by the Equestria Education Association (EEA), which oversees all educational activities in Equestria.

Twilight prepares her plan for the school and presents it to the EEA, led by Chancellor Neighsay. Neighsay is concerned about the ability of Twilight and her friends to run the school given their regular adventures, but Twilight convinces him that the school is an important part of defending the realm and parts beyond. Neighsay grants preliminary approval on the basis that the school will help teach ponies how to protect themselves from threats outside Equestria, ignoring Twilight's insistence that it's meant to help them get along. Neighsay provides her with a detailed EEA rule-book to follow.

Twilight and her friends construct the school next to her castle, and when they open it up, Twilight reveals she not only has brought in pony students, but students from the other kingdoms. The pupils include Gallus the griffon, Ocellus the changeling, Yona the yak, Silverstream the seapony (who is able to take her hippogriff form at will with help of a necklace), and Smolder the dragon. Those five, along with Sandbar, a local earth pony, become quick friends.

The school seems to start off okay, with Twilight and her friends teaching the students, but Twilight gradually recognizes that their ways of teaching are against the EEA book, and makes sure both teachers and students conform to the rules. This quickly sours the mood at the school, but Twilight insists they need to do this to get EEA accreditation. Many of the students begin to doubt that Twilight and her friends are the apparent heroes of Equestria they claim to be, since they are so boring as professors. On the Friends and Family day, during which Chancellor Neighsay plans to review Twilight's efforts, Gallus and Smolder convince their friends to ditch classes. This leads to some panic by Twilight, Starlight Glimmer, and Rainbow Dash when they find they've gone missing while under the eagle-eye of Neighsay. The six students, having spent enough time to relax at a local lake and get to know each other better, decide to fly back to the school; this leads them to ask Ocellus what forms she can transform into, which she demonstrates by becoming a giant insect just as they near the school where all their family and friends have gathered. This creates a mass panic, quickly ruining the ceremony. Neighsay is outraged by it, and is even more livid when he finds that there are non-ponies enrolled at the school. His angry outbursts at the non-pony students anger the various non-pony guardians, such as Prince Rutherford and Dragon Lord Ember, who decide that the school is not helping teach their students friendship, and take them away, while Neighsay immediately closes it, placing a magical lock to prevent anyone entering it.