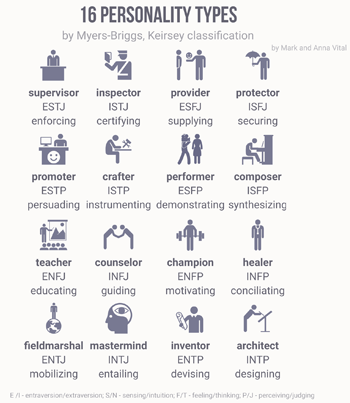 The Myers-Briggs Temperament Indicator is a method of popular psychology which some people believe measures and typifies how people perceive the world and make decisions. Whilst not accepted as scientific, it is nevertheless a popular method of categorizing people as it it simple enough for most people to understand. It is related to Big Five Personality Traits indicator and HEXACO indicator.

The categories originated from Carl Jung's theory about two pairs of cognitive functions:

Mother and daughter team Katharine Briggs and Isabel Myers expanded Jung's typing into the personality indicators used today. Corporations have used it in the belief that it will help to figure out what their employees are best suited for. Whether or not that is a good idea doesn't matter to us. What it is and how it is used in storytelling goes like this:

The four letters are composed of eight cognitive functions:

Finally, which ever function you use more out of the two, the second part of it will be the I/E of your whole type. For example, if you use Ne more than Fi, then your personality type will be ENFP.

The following are short descriptions of all 16 types.

David M. Keirsey took Myers's work, and, inspired by one of her observations, made his own adaptation, in which the 16 types are organized into four main groups: Guardians (∞S∞J), Artisans (∞S∞P), Rationals (∞N∞T), and Idealists (∞N∞F).note They can also overlap with Four-Temperament Ensemble and Four-Philosophy Ensemble.

Note that MBTI is often confused for having "four letter" systems, such as "J' and "P". These systems are inaccurate and simply function on stereotypes. However, these systems are ones people take first, as they are easier to understand. As a resut, MBTI as a whole gets criticized by these letters, even though the actual process is much different.

While the MBTI can be an useful tool on understanding various people and how they tend to act, the greatest problem with MBTI is the weak prognosis value. MBTI can tell fairly reliably on how people select their careers. It cannot tell how well they succeed on their careers. For example, an ENTJ is likely to become a leader or manager, but MBTI will not tell whether or not he will be a successful one or a failure.

For fun, check out the info provided by

The Other Wiki, learn more information and take a test to determine your temperament here

, and see Examples of Myers-Briggs Personalities in Stories. Also, check out cognitive functions

Many evil things there are that your strong walls and bright swords do not stay. You know little of the lands beyond your bounds. Peace and freedom, do you say? The North would have known them little but for us.
—The Lord of the Rings

At that sound the bent shape of the king sprang suddenly erect. Tall and proud he seemed again; and rising in his stirrups he cried in a loud voice, more clear than any there had ever heard a mortal man achieve before.
—The Lord of the Rings

Do not meddle in the affairs of wizards, for they are subtle and quick to anger.
—The Lord of the Rings

"Speak no evil of the Lady Galadriel!" said Aragorn sternly. "You know not what you say. There is in her and in this land no evil, unless a man bring it hither himself."
—The Lord of the Rings