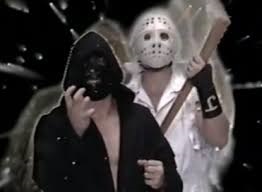 Jason the Terrible is a Professional Wrestling gimmick that debuted in Stampede Wrestling in the late 1980s. Booker Bruce Hart based the gimmick on Jason Voorhees of the Friday the 13th horror movie series. The first guy to do the gimmick was Karl "Butch" Moffat. Jason was originally a monster heel, until he got over enough to be turned face. Moffat was forced into temporary retirement after suffering a broken leg while traveling in a car with Davey Boy Smith and Chris Benoit on July 4, 1989. The gimmick was taken up by Roberto Rodriguez in the WWC in Puerto Rico and in the hardcore promotions IWA Japan and Big Japan Pro Wrestling, and has been used by other wrestlers in other promotions.

You can find the basics about Moffat's career at Wikipedia

"LUKE IS ANGRY ABOUT THESE TROPES!"