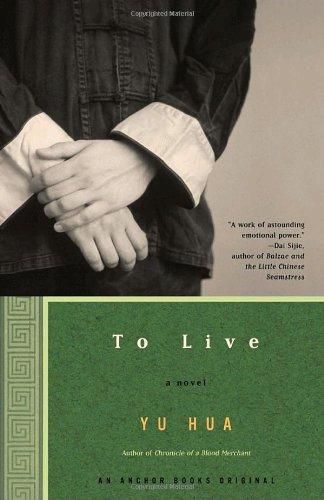 To Live (in traditional Chinese: 活着; in simplified: 活著; pronounced Huózhe in Mandarin) is a 1993 novel by Yu Hua. Our nameless narrator meets an old man in the countryside who tells him his life story. This is how it goes.

After losing all of his family's land and fortune to gambling debts, Fugui stops being a Rich Bitch Jerkass and begins life as an honest, hardworking family man. Too bad life doesn't let him.

After he is conscripted by the Guomindang and must leave his family, Fugui fights and sees the horrors of the Chinese Civil War, returning to him home years later to suffer the tumultuous changes that the Cultural Revolution and the Great Leap Forward has wrought.

The book's most prevalent theme is that people should keep on living for the sake of life, despite their various mishaps and tragedies. To Live is also rather well-known for its description of Chinese life in Red China, such as its illustrations of backyard steel furnaces and communes.

A movie of To Live came out in 1994, directed by Zhang Yimou and starring Ge You and Gong Li.

The the film based on the novel contains: