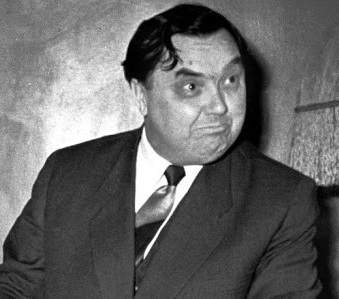 Maybe not the best leader that Mother Russia ever had, but damn it, he did a fine impression of Curly Howard!
Advertisement:

Georgy Maximilianovich Malenkov (9 December 1901—14 January 1988) was a Soviet-era statesman, whose reputation can best be summed up as "that guy in-between Stalin and Khrushchev who no-one really remembers". To the people who do remember him, he was either a well-intentioned man who wasn't really cut out to deal with the volatile post-Stalin era, or a bungling idiot who allowed himself to be steamrolled and eventually deposed by Khrushchev.

He managed to find favor with Stalin during the early days of his regime, soon rising to become the chief membership clerk of the Communist Party; a position that might not sound particularly important (and in most aspects, wasn't), but one which helped him become a trusted confidante of Stalin when he began carrying out his purges in the mid-late 1930s. He began taking on a series of successively higher ranks during World War II, and also became a close ally of Lavrentiy Beria, the head of the NKVD, the country's secret police. Between them, the two managed substantial parts of the USSR's war strategy, including the initial development of the country's nuclear arsenal (Malenkov would, ironically, later advocate nuclear disarmament during his short-lived premiership) and purging the Red Army of anyone who was suspected of disloyalty to Stalin, glory-seeking, or general incompetence.

After the war ended, Malenkov drifted out of Stalin's favor for a couple of years, but swiftly came back into it when Stalin's de facto right-hand man, Andrei Zhdanov committed the heinous act of not being critical enough of Yugoslavia's government in an international conferencenote (Which Zhanov might have just barely gotten away with, if not for his allegedly showing up extremely drunk when Stalin summoned him to explain himself). Zhdanov was promptly confined on trumped-up charges of mental illness, and died a few months later, likely after being deprived of critical medical assistance on Beria's orders (something that Beria would later be accused of doing to Stalin himself). Malenkov therefore took over Zhdanov's post as Second Secretary, and in this role he continued to oversee purges of anyone who might threaten Stalin's popularity — and by extension, Malenkov's own route to succeeding Stalin.

Upon Stalin's death in March 1953, Malenkov succeeded him as the supreme leader of the Soviet Union. He only managed to hold absolute power over the country for a little over a week, however, after which the rest of the party insisted on power being split between him and Khrushchev — Malenkov took over the post of Premier, while Khrushchev took up the role of First Secretary — in order to prevent anyone causing the kind of damage that Stalin (or, for that matter, Hitler) had with that sort of unchecked authority. This resulted in a Troika — Beria was the third member, as Malenkov's deputy — in which Malenkov was nominally the senior partner, but Khrushchev soon began quietly expanding his base of power. Malenkov, whose main political skill was as a Professional Butt-Kisser, found out the hard way that while this might help you get to the top of the greasy pole, it's not a terribly useful skill when it comes to staying there.

Soon after coming to power, Malenkov put a halt to the increasing purges which had been taking place during Stalin's final years, in an attempt to signal that he would be pursuing a kinder and gentler version of Stalinism. In reality, it undermined his authority from the get-go, as pro-Stalinists considered it an act of weakness, while anti-Stalinists thought it made Malenkov a hypocrite, considering that he had organized so many of Stalin's purges. Indeed, his role in said purges might have brought his premiership to a much swifter and more violent end, if not for the fact that the far more universally-detested Beria ended up carrying the can for them, courtesy of Khrushchev. Malenkov was able to escape more immediate consequences by throwing Beria under the bus, leading to his former ally being put on trial for treason and executed, but the longtime association between the two men made it difficult for him to completely distance himself from Beria, further destabilizing his leadership.

The few economic reforms that Malenkov attempted failed to produce any real results — though he did make an early attempt at a few things that would be carried out decades later by Mikhail Gorbachev — and by early 1954 Khrushchev had effectively taken over all the real power, with Malenkov left only as a figurehead. He still managed to hold onto the position of premier until the following February, when Khrushchev was finally able to strong-arm him into resigning the office, ostensibly for his refusal to dismantle the system of gulags (which Khrushchev would eventually do, albeit not for another five years).

He nonetheless stayed on in the Politburo in a mostly ceremonial role for the next two years, until he and another former premier, Vyacheslav Molotov, spearheaded an attempt to overthrow Khrushchev and replace him with Malenkov's own successor as premier, Nikolai Bulganin, in the wake of Khrushchev's public denunciation of Stalin. While the majority of his fellow Politburo members actually supported Bulganin, the military supported Khrushchev, allowing the latter to remain in office. Fortunately for Malenkov and his co-conspirators, Khrushchev couldn't exactly have them executed for treason without looking like a complete hypocrite, and so he had them all Reassigned to Antarctica in some way — in Malenkov's case, by being assigned to manage a hydro-electric plant in Kazakhstan. Malenkov thereafter mostly lived in obscurity until his death three decades later; for what it's worth, he ended up outliving all of his successors as Soviet leader except for Mikhail Gorbachev.

Historians have struggled to know exactly what to make of Malenkov's premiership, partly because it was so short-lived, and partly because there's still much debate about exactly when he effectively lost power to Khrushchev. While many agree that the reputation he picked up as a completely inept bungler who only ascended to power off the back of being Stalin's Yes-Man is probably undeserved (and most likely an image conjured up by Khrushchev and his allies in order to justify removing him from power), it's also generally agreed that Malenkov's political skills were lacking, even if his associations with Stalin and Beria didn't effectively bury his premiership from the get-go.