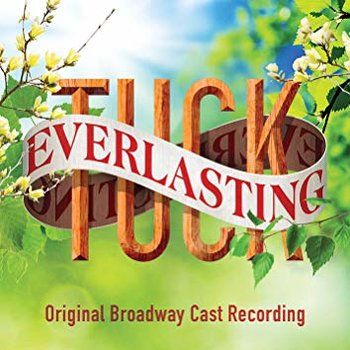 Does the story end, or never end? Does it fade...or is it everlasting?
"Don't be afraid of death, Winnie. Be afraid of not being truly alive. You don't need to live forever. You just need to live."
—Angus Tuck, "The Wheel"

Tuck Everlasting is a musical written by Chris Miller, based on the 1975 novel of the same name. It opened at Broadhurst Theatre on April 26, 2016. Despite having positive reviews, the show closed on May 29, 2016, after only 39 shows. Nevertheless, the show has a relatively large fandom for its short run, as well as several award nominations.

The story takes place in Treegap, New Hampshire, in 1893. 11-year-old Winnie Foster, tired of sitting at home all day, decides to run away from her overprotective mother and grandmother and explore the woods, where she meets a family of immortals. Each of the members of the Tuck family has a different perspective about their immortality. The youngest, Jesse, loves the adventures his immortality enables him to have but wants a companion; his brother Miles is miserable because of what his immortality cost him; their mother Mae finds joy in reminiscing but struggles to be happy in the present; and their father Angus is content enough but simply wishes to return to the normal cycle of life. Winnie must decide whether or not to join the Tucks in their immortality. Meanwhile, The Man in the Yellow Suit is near to discovering the secret of said immortality, which he has dedicating his life to finding for his own gain.