Literature / Jacob Have I Loved 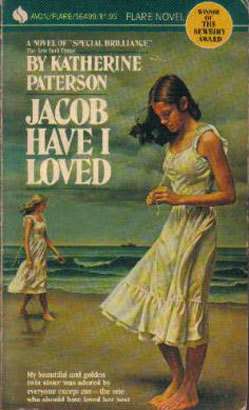 Jacob Have I Loved is a 1981 Newbery Medal-winning novel by Katherine Paterson, author of Bridge to Terabithia.

The men of the fictional island of Rass in the Chesapeake Bay have always "followed the water" by becoming crabbers/fishers, starting businesses that their descendants can continue for generations. The novel follows Louise, a daughter of the old Bradshaw family and the older of twins. Her twin sister, Caroline, is everything Louise isn't — beautiful, talented, feminine, and is such considered the favorite. Over the course of the novel, Louise tries her best to break out of her sister's shadow, out of what the people of Rass expect from her, and ultimately, what she expects out of herself.