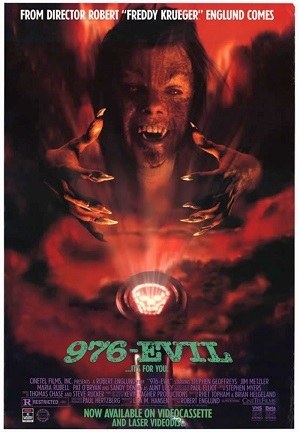 When you dial, your phone bill will be the least of your worries.
"Out of the darkness and into light, comes your horrorscope on this dark and stormy night."
— 976-EVIL's greeting message
Advertisement:

Spike (the bad boy) and Hoax (the introverted nerd) are cousins who live with Hoax’s overly religious mother. They stumble across a mysterious premium-line phone number, 976-EVIL, which appears at first to be just a fun novelty hotline that offers creepy fortunes to those who call, but they soon discover that it’s a direct line to hell—literally. Spike loses interest, but Hoax uses the powers the number gives him to exact revenge against everyone who has wronged him, inadvertently allowing his soul to be slowly taken over by Satan. Spike must race to stem the tide of destruction Hoax is perpetrating, hoping like hell that he can save his cousin’s soul.

Along with A Nightmare on Elm Street 4: The Dream Master, the first screenwriting credit of Brian Helgeland (who helped Trick or Treat writer Rhet Topham develop his story; and while 976-EVIL was finished first, to the point Englund recommended him for the next Freddy Krueger script, The Dream Master got to theaters before), who would win an Academy Award with L.A. Confidential.