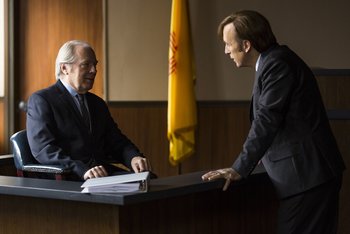 Shortly after the onset of his EHS, Chuck attempts to reconcile with Rebecca with an "impromptu" gas-cooked candlelit dinner, with Jimmy on hand to add to the alibi (and caution him about the possible harm that keeping his secret may bring). Everything goes smoothly until Rebecca takes a call from her conductor, driving Chuck to slap the phone out of her hand. She angrily calls a cab as Jimmy and Chuck argue over whether or not to reveal his condition.

Presently, Jimmy brings a goldfish to Dr. Caldera to get in contact with someone with a "light touch." Caldera asks if they will need to fit into a tight space.

Kim uses the genial mood after a successful New Mexico Banking Board hearing to tell Kevin and Paige about Chuck's allegations. Kevin is particularly insulted: nothing worse than a man who won't owe up to his mistakes, he sneers. Kim assures a more skeptical Paige that Mesa Verde will not suffer any backlash.

Chuck and Howard visit the courtroom where Jimmy's trial will be set to see how Chuck's EHS will respond; they'll be able to turn off everything but the exit signs, so Chuck decides to testify in person. Howard protests: his and the private investigator's testimonies should be enough. When Chuck insists, Howard admits that he's concerned about HHM's reputation, as their blind eye towards keeping documents at Chuck's house has raised security concerns. Chuck chides him for putting the firm above the proper process of the law: "Let justice be done, though the heavens may fall," he smugly concludes.

Kim's opening statement claims that the real story behind the trial is of the feud between the McGill brothers. Howard gives his testimony of Jimmy's break-in. Under cross-examination, Howard tries to claim that Chuck shut Jimmy out of HHM to avoid the appearance of nepotism, but Kim forces him to admit that the other Hamlin in HHM is his father. Jimmy can't dwell on this victory: he asks to review his notes in order to stall for time when he's told "Flight's delayed."

While Chuck tries out different testimonies ("Did Ted Kaczynski's brother love him, too?"), the confession tape is played at the trial. The committee orders everyone present to place their watches and cell phones in a bin to be taken out of the courtroom; Jimmy claims that he left his cell in the car. Howard drives Chuck to his reserved parking space, bumping into someone on his way to the courtroom. The man is revealed to be Huell, who gives Chuck a smug glance behind his back.

Chuck is sworn in and gives his account of Jimmy's breaking and entering. The prosecution questions him about his intentions: although some exaggeration of his condition was necessary, he claims that he had his full faculties and does not hate his brother. The law is just too important for Jimmy to use as he pleases.

He is stunned to see Rebecca enter the courtroom and warmly greet Jimmy, prompting him to ask for a recess. Rebecca asks Chuck why he never came forward with his condition, and clarifies that Jimmy asked her to come in support for him. In response, Chuck bluntly tells her that Jimmy flew her in to unsettle him, and asks her to stay so that she can see "what's what."

Elsewhere, Kim tells Jimmy that Rebecca will hate him for what he's going to do to Chuck. Jimmy agrees.

Jimmy cross-examines Chuck, using the photos Mike took of his house's interior to put his supposed mental stability in question at the time the tape was made. Chuck claims that his hysterical state was all "play-acting", and that the situation the photos present is necessary under his EHS. Jimmy pounces, having Chuck testify about the specifics of his condition: in particular, how close an electrical object needs to be to affect him. Chuck slyly asks him if Jimmy has something in his pocket. Jimmy pulls out his cell phone, taking Chuck to task over his inability to detect it.

However, Chuck asks if he can take the phone: sure enough, the battery has been removed. He berates a mortified Jimmy for thinking his condition is some psychosis as the committee makes it clear that they won't be indulging Jimmy anymore. "What do I have to do to prove it to you," Chuck magnanimously asks.

"Could you reach into your breast pocket and tell me what's there?"

Nonplussed, Chuck reaches into his suit jacket...and quickly drops the object inside onto the floor. It's the phone's battery, fully charged. Jimmy demands that Chuck put it on the record and brings Huell to the court's attention, who will testify (he is on the witness list) that he planted the battery on Chuck an hour and 43 minutes ago, throwing Chuck's entire testimony into question. His humiliation in front of his peers and ex-wife switches to anger when the prosecution compares his condition to schizophrenia:

Chuck goes on a bitter and unhinged rant in front of a stunned courtroom, begging the court to punish Jimmy over past misdeeds: engineering a rescue with an infringing billboard to draw business, doctoring the Mesa Verde files and then bribing a clerk to lie about his involvement, doing a "Chicago Sunroof", and most of all, swiping from the till of his parents' store. "Stealing them blind! AND HE GETS TO BE A LAWYER!? What a sick joke! I should have stopped him when I had the chance..." He trails off when he sees he has revealed his true colors to the courtroom. Jimmy ends his cross-examination as Chuck notices the exit sign, buzzing with harmful electricity.