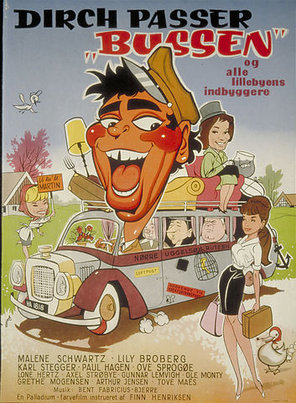 The Bus (Bussen) is a Norwegian comedy film (albeit with a serious undertone) made in 1961, and remade for Danish audiences in 1963. The plotline is essentially the same in both films:

A bus driver, who owns and drives an old fashioned model, is greatly loved by the local community. He takes his time, is known to run errands for people on the way, and is a social glue between people. If anyone`s in trouble, be sure the bus driver is there to fix it, although the lagging makes his rounds more than a little late. As his bus is an old model, the vehicle has to be pushed uphill in the more difficult parts of the road. In spite of this, people love him, not least for his reliability and his human attitude. The only one who scorns him is the municipality clerk, who has a scheme to get rid of him, installing a new and more modern bus, and connecting the local route to a bigger network of routes. This may cost the busdriver his job, but would guarantee more efficiency for the passengers. The mayor tries to protect the driver, and his wife (who is also the local midwife) even more. When it is known what the plans are, a public rebellion evolves, securing that a new bus is installed, and that the bus driver keeps his profession. The midwife and all the commoners shame the municipality council into relenting to their wishes.

The Danish version made some amendments to the original script, putting in a Love Triangle for the main character (who also was a younger actor), more Slapstick, and generally a more urban environment. This version is also Lighter and Softer compared to the original storyline, tied up some loose ends, and relied even more on the Rule of Funny.