Characters of the Cars franchise introduced in the original 2006 film itself. 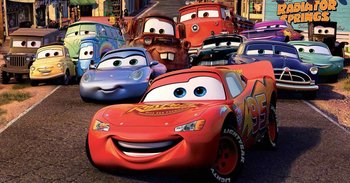 A 1951 Hudson Hornet, Doc Hudson is Radiator Springs' medical doctor and judge. He sentences Lightning to fix the town's road after destroying it. He hides his past from his friends, which Lightning accidentally discovers, which Doc does not like one bit. 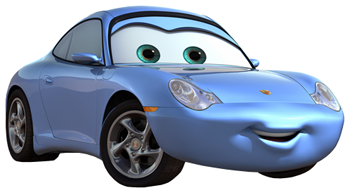 "Don't fear failure. Be afraid of not having the chance, you have the chance!"
Voiced by: Bonnie Hunt
Basis: 2002 996-series Porsche 911 Carrera

A Porsche 911 Carrera, Sally is an Los Angeles attorney who grew tired of her life in the big city and ended up in Radiator Springs. She becomes the town attorney and runs the Cozy Cone Motel. She longs to see the town restored to its former glory, and becomes Lightning's girlfriend. 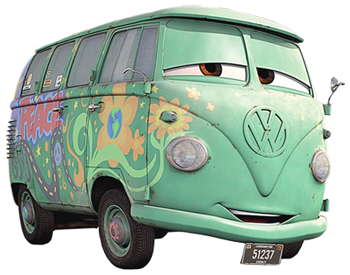 A Volkswagen Microbus, a New-Age Retro Hippie who sells organic fuel. Has a fiery friendship with Sarge. 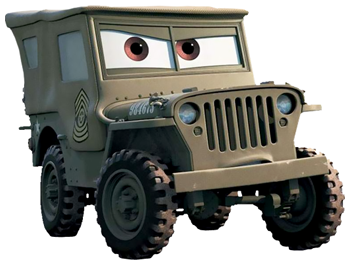 Voiced by: Paul Dooley
Basis: 1941 Willys model jeep
"A-TEN-SHUN! Kiss the pavement goodbye, gentlemen! When I'm finished with you, you'll have mud in places you didn't know you had!"

A 1941 Willys MB Jeep, Sarge is Fillmore's best friend and neighbour. He runs a surplus store. 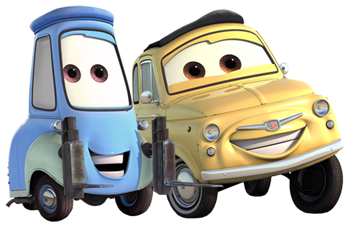 An Italian Fiat 500 and Isetta-based forklift. Guido and Luigi run Luigi's Casa Dell Tires, which has a replica of the Leaning Tower of Pisa made from tires. Luigi is a big fan of race cars, particularly Ferraris. Guido only speaks in Italian, and can change tires in seconds, wanting to perform a pit stop on Lightning during his time in town.

Flo is the wife of Ramone, and is manager of Flo's V-8 Cafe gas diner. Her design is a stock 1950s show car. 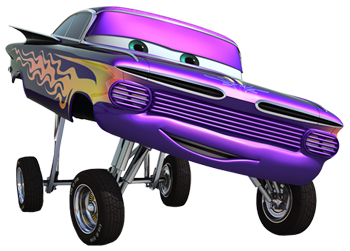 "But you do need a paint job, man! Ramone will paint you up right."
Voiced by: Cheech Marin
Basis: 1959 Chevrolet Impala Lowrider

Radiator Springs' body artist and husband to Flo, Ramone is a 1959 Chevrolet Impala. He is very proud of his art deco, usually altering his paint job in every new scene. 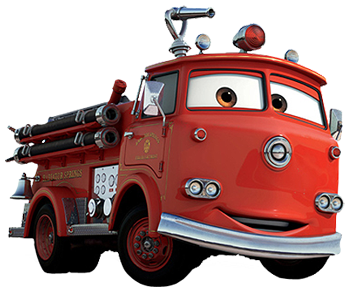 A gentle fire truck. He is not one for words, is quite shy, and very fond of the plants in Radiator Springs. 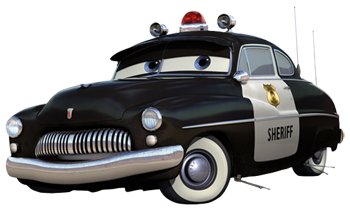 "Boy, you're in a heap of trouble."
Voiced by: Michael Wallis
Basis: 1949 Mercury Club Coupe 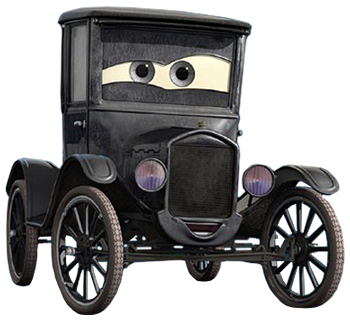 An elderly 1923 Ford Model T coupe, Lizzie is the widow of the town's founder Stanley. She runs Radiator Springs Curio, which sells car souveneirs and accessories. 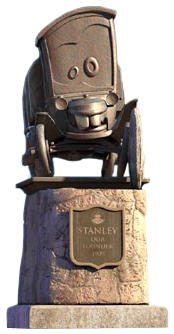 The late founder of Radiator Springs and husband to Lizzie. A statue of him stands outside the town's firehouse. 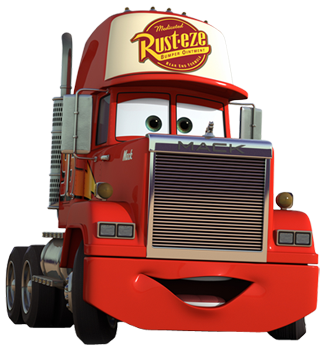 "They did give you your big break. Besides, it's in your contract."
Voiced by: John Ratzenberger
Basis: 1985 Mack Super-Liner

A Mack Superliner truck who is Lightning's transport and the closest thing he has to a friend.

Harv
Voiced by: Jeremy Piven (US) and Jeremy Clarkson (UK)

Lightning's agent who is only heard over the phone. America assumes that Harv is a 1996 Oldsmobile, while Clarkson believes that he is a 1979 Ford Granada Ghia. 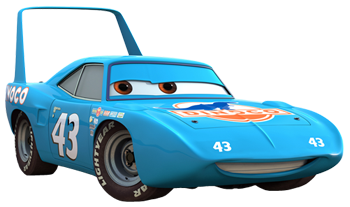 "This ain't a one-man deal, kid. You need to wise-up and get yourself a good crew chief and a good team. And you ain't gonna win unless you got good folks behind you, and you let them do their job, like they should."
Voiced by: Richard Petty
Basis: 1970 Plymouth Superbird

A 1969 Plymouth Superbird, Strip Weathers, better known as "The King", is the golden boy of Dinoco. He is participating in his last championship before retiring. 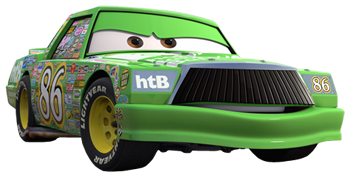 "Hey, McQueen, that must be really embarrassing. But I wouldn't be worry about it. Because I didn't do it! Hahaha!"
Voiced by: Michael Keaton (first film); Bob Peterson (third film)
Basis: 1986 Buick Regal Stock Car

Lightning's obnoxious rival who is Always Second Best to the King. He is a green 1986 Buick Regal racing car.

"Oo-ee! That was one close finish. You sure made Dinoco proud."
Voiced by: Humpy Wheeler
Basis: 1975 Cadillac Coupe De Ville

The founder and owner of Dinoco. With The King's retirement, Tex intends to make whoever wins the Piston Cup into Dinoco's new spokes-car.

A quartet of troublemaking cars who distract Mack, causing Lightning to roll out of the back of his trailer and get lost.

Tractors, Frank and Vroomaroundus Bugus
The animals of the Cars world. Tractors stand in for cows, being rather docile creatures who Mater likes to scare via tractor tipping. Frank is a combine harvester who resembles a bull. The Vroomaroundus Bugus are small insects resembling Volkswagen Beetles.
Mia and Tia

A pair of twin Mazda Miatas who are huge fans of Lightning. 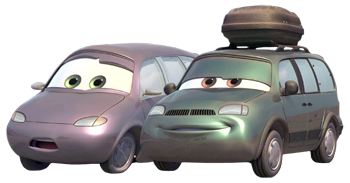 A married couple who wander into Radiator Springs whilst looking for the freeway, but are terrified by the clingy and pushy townsfolk. Van is a Ford Winstar and Minny is a Dodge Caravan.

Lightning's sponsors who got him his big break.