Recap / Pokémon S1E8 "The Path to the Pokémon League" 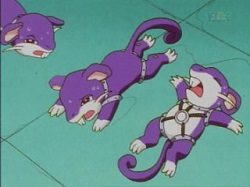 It's okay because he really cares about them..
SANDSHREW, BACK IN THE POOL!
— AJ

Japanese Title: The Road to the Pokémon League

Ash runs across a Pokémon Trainer named AJ, who is said to have 98 straight wins. Ash is beaten easily and finds out this is mostly because AJ works his Pokemon extraordinarily hard. Ash is very upset and argues with AJ about the proper way to train Pokémon, until Team Rocket kidnaps AJ's Sandshrew... when Sandshrew comes back Ash is moved by AJ's relief and Sandshrews apparent affection for AJ. AJ then fights Team Rocket and gets his 100th win, ending the match with a Fissure move that destroys the arena completely.