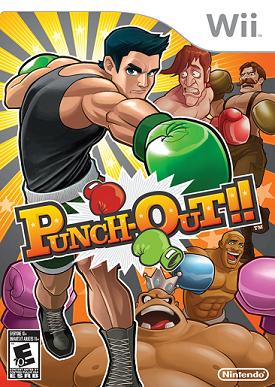 Let's keep it clean! Now come out boxing!
"You think the speed of your fingers can match the strength of my fists?"
— Mike Tyson
Advertisement:

Punch-Out!! debuted in 1983 as a dual-screen arcade game produced by Nintendo. It was a boxing game where the player fought for a world title against a series of quirky opponents, typically consisting of various comically exaggerated national stereotypes, such as Glass Joe, Bald Bull, Pizza Pasta, and Mr. Sandman. It was followed by a sequel, Super Punch-Out!!, released in 1985, which added more stereotypes like Bear Hugger, Dragon Chan, Vodka Drunkenski,note Renamed Soda Popinski in home console versions Great Tiger, and Super Macho Man. A spinoff game titled Arm Wrestling (an arm wrestling game) was also released in 1985. A modified version endorsed by the British heavyweight boxer Frank Bruno was also released in 1985 on various eight bit computers of the era.

The series made its home console debut on the Nintendo Entertainment System in 1987. Originally released in Japan as a gold cartridge given away exclusively to Second Place Winners of the Famicom Golf: U.S. Course Tournament, this new version of Punch-Out!! featured most of the classic boxers, as well as newcomers such as Von Kaiser, Don Flamenco, and King Hippo, Mario in a cameo as the Referee, and two new protagonists in Little Mac and his trainer Doc Louis. The final opponent was Super Macho Man.

After then-Nintendo of America CEO Minoru Arakawa saw Mike Tyson at a boxing match, the decision was made to capitalize on his then-growing popularity, by releasing the game publicly worldwide under the name Mike Tyson's Punch-Out!!, in which the final opponent was the infamous real-life champ himself. The 1990 reissue of the game (available in the first Animal Crossing game as well as on the Wii and Nintendo 3DS Virtual Consoles instead of the Mike Tyson version), reverting back to the original Punch-Out!! name, replaced him with a fictional champ named "Mr. Dream" (actually a white head swap of Tyson, more reminiscent of Rocky Balboa). Many people assume that this stems from Tyson being convicted of rape, causing Nintendo to ditch him, but since Tyson was dropped from the game a year before he was arrested on the rape charges, this is clearly not the case. In reality, Nintendo's contract with Tyson expired, and since Tyson was no longer the heavyweight champion of the world, having lost the title earlier to Buster Douglas, Nintendo opted to neither renew the contract nor seek a new one out with Douglas— who had already signed a licensing deal with Sega to use his likeness in a pair of boxing games for the Master System and Genesis (a decision made specifically to spite Nintendo).

A second console installment was released for the Super Nintendo Entertainment System in 1994 titled Super Punch-Out!! (unrelated to the earlier arcade game, but closer to it gameplay-wise), which brought back several characters from the first NES game (as well as the arcade installments), while introducing new ones, including new champions: the Bruiser Brothers, Rick and Nick.

Fifteen years later, a Wii version of Punch-Out!! was released in 2009, developed by Next Level Games (of Super Mario Strikers fame). Featuring modernized 3D graphics and full voice acting (with all boxers accurately speaking their native tongue), the game functions as a "greatest hits" collection of the series, consisting almost entirely of boxers from previous entries with the same patterns and weaknesses. This game adds several new modes to play. In "Title Defense," Little Mac has to defend his newly-gained World Circuit title against the boxers he defeated in the traditional Contender Mode to win it, but they have new moves and strategies to make the fights much more difficult. "Mac's Last Stand" pits Mac against an endless series of randomly generated Title Defense opponents, and he will retire from boxing once he loses three fights. Fights from Contender, Title Defense and the secret character unlocked via Last Stand can all be replayed anytime thanks to Exhibition Mode, where the player can tackle several unique challenges that have to be completed when fighting against the boxers; finally, there's a super-secret mode that turns Mac into a One-Hit-Point Wonder during the fights, elevating the difficulty into a level that is only suitable for true experts. The game was rereleased on Wii U eShop in January 2015.

A WiiWare stand alone game titled Doc Louis' Punch Out!! is an exclusive download for platinum Club Nintendo members where players take control of Little Mac once again and fight against his mentor, Doc Louis. Released around the last week of October 2009, players spar with Doc Louis in training sessions, so the game could be a prequel to the Wii version. Doc Louis can also use the same Star Punch technique as Little Mac, since he invented it. This title was later rereleased for all Club Nintendo members to purchase during the club's closing sale in 2015.

Little Mac has also appeared three times in the Super Smash Bros. games; as an Assist Trophy in Brawl, and as a playable character in the fourth game and Ultimate. He also cameoed in the Japan-only adventure game Captain Rainbow, where he's gone overweight from years of not boxing and needs help getting back into shape.

King Hippo, meanwhile, appeared as one of the major lackeys to Mother Brain in Captain N: The Game Master, though no other characters from Punch-Out!! ever appeared in the show for some reasonnote unless one counts Glass Joe's cameo in "Videolympics".