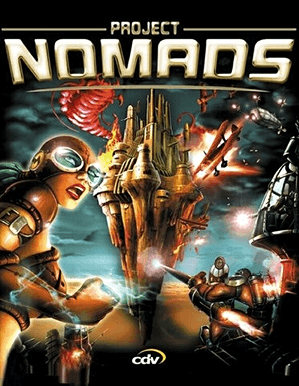 Project Nomads is an adventure game, taking place on a ruined steampunk planet. The world itself has fractured into smaller pieces. The laws of physics are in a strange place, as the remaining world is comprised of floating chunks of the planet, with the "the sea of flames" at the very lowest level. The player takes control of 1 of three Nomads, searching for treasure. The game begins with the player character left for dead after their plane crashes on a remote island in enemy territory. However, the crash frees a "Master Builder" from his prison, who rewards the PC by turning the island into a makeshift warship. And the game goes from there.

The gameplay mainly consists of search new areas for artifacts, which can be used to further strengthen the island, and fighting off aggressors with said ship. The three choosable characters differ mainly in the type of weapons they use. John has gatling towers which fire a stream of weak bullets, Goliath has massive cannons firing oversized shells, Suzie falls somewhere in between.