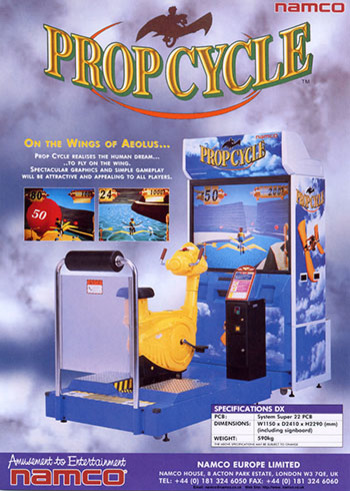 Prop Cycle is an Arcade Game developed by Namco in 1996.

In Prop Cycle you control a young man piloting a flying bicycle, the Prop Cycle, across three levels. In each level you fly through a course popping balloons with different points on them. The goal is to score enough points before a time limit, doing so beats the level and allows the player to keep going, losing costs the player more quarters to try again. If the player pops all the balloons in a level the remaining time is converted into points and added to the total score. There are also balloons that add seconds to the time limit. In advanced mode if the player finishes all three levels they have exactly one shot at beating the final level and the game.

The story ingame is that the three levels are qualifying rounds to test the young man. If he wins he will be allowed to fly to Solitar, the name of three floating islands in the sky.

The game is unique for it's control scheme. The arcade cabinet contains a model of the Prop Cycle, with a seat, pedals, and handles. The player can tilt the cycle side-to-side, push and pull the handles to aim the Prop Cycle up and down, and pedaling gives the Prop Cycle lift.

Suffice it to say Prop Cycle is one of the most physically taxing examples of Exergaming ever. Not only does the player ride a bike, the player has to ride a bike quickly to keep the Prop Cycle afloat, and steer it on a horizontal and vertical axis under a strict time limit.