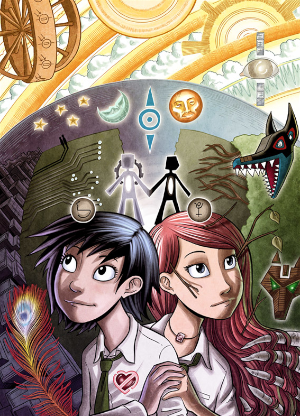 My God, it's full of symbols.
"Within the first week of my attendance, I began noticing a number of strange occurrences. The most prevalent of these oddities being the fact that I seemed to have obtained a second shadow."
— Antimony
Advertisement:

is a Science Fantasy Webcomic by Tom Siddell about a strange young girl attending an equally strange school. The intricate story is deeply rooted in world mythology, but has a strong focus on science (chemistry and robotics, most prominently) as well.

Antimony Carver begins classes at the eponymous U.K. Boarding School, and soon notices that strange events are happening: a shadow creature follows her around; a Rogat Orjak smashes in the dormitory roof; odd birds, ticking like clockwork, stand guard in out-of-the-way places. Stranger still, in the middle of all this, Annie remains calm and polite to a fault.

Meanwhile, Annie befriends the technically-minded Katerina Donlan, whose parents both teach at the Court. The two serve as foils for each other: Kat's energetic, outgoing personality plays off Annie's initial reserve, which enables much of their character development.

Kat soon gets roped into Annie's investigations of the Court's mysteries, but every answer they receive raises more questions: about the school, about their fellow students, about the woods just across the river, and about their own parents. Soon, they start stumbling on creatures and intricate symbols from all possible mythologies — as well as plain old chemistry — topped off by the Oasisamerican Trickster God Coyote, who has his own designs for Antimony and the school premises. Throughout all this, Annie and Kat uncover the story of a truly frightening ghost woman, whose portrait is worshiped by Gunnerkrigg's crew of golem robots and who seems to be the key to some of the school's greatest mysteries.

Although the Jigsaw Puzzle Plot draws on some dark childhood fears, there is more than enough optimism (both innocent and realistic) to offset it.

You should start from the beginning.

The comic is also published in hardcover form.

note For those interested in minutia, this isn't the first print version of GC. Back in 2006, Tom published the first seven chapters as a paperback through Lulu.com's print-on-demand service. This is the reason for the "Treatise" page at the end of Chapter 7. This paperback was discontinued months before "Orientation" was announced. So far, the volumes include:

The bonus comic City Face has its own article. Siddell has also published some side stories

. With the exception of "Zim Grim", these were first published as print comics:

Has a tabletop card game crossover