Webcomic / The Hazards of Love 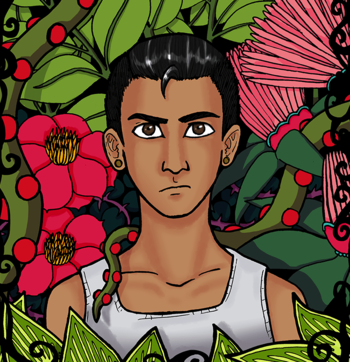 This definitely isn't Queens.
The story of a queer teenager who made a few bad decisions and has found themselves in a world very far from Queens.
Advertisement:

The Hazards of Love

is a web comic about a nonbinary teen from Queens who is tricked into giving up their life by a magical creature and gets dragged into a surreal place called Bright World, where humans are classified as "edible" and "inedible." Now they have to figure out a way to get back home while doing their best to avoid dying.

The comic style is one of urban fantasy with a touch of horror, with a primarily Latinx cast. It is heavily influenced by 60s movies from Mexico and Mexican gothic horror.

The web comic is the latest by Stan Stanley, creator of Friendly Hostility and Other People's Business. The comic is not in the same universe as the creator's previous comics.

In March, 2021 the first twelve issues were collected and published by Oni Press in The Hazards of Love: Bright World

Tropes used by this web comic: