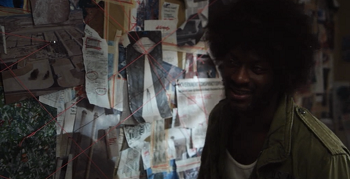 Makes you wonder just how close to being this guy Hardison actually is.

Intrepid Reporter Monica Hunter is on her show, The Hunt for the Truth, talking about a tragic school accident and blaming the driver, Ray Pennington, even telling the people he suffers under mental illness. Due to that story, Ray tries to commit suicide but luckily is saved by his daughter Sarah. Sarah meets with the team and asks them to take down Monica Hunter and restore her father's reputation. As she leaves, Sophie announces that she wants to take the lead on this one, and despite Nate's protests, he agrees to let her. Sophie explains to the team (despite their surprise at her doing Nate's part) that they need to get the network, BNI Studios, to apologize and disavow Monica's story and her exposé show. To do that they’re going to fake a story that will destroy her reputation. The team discusses options and they realize Monica wants respect, as she's a joke among serious journalists. Sophie figures out a plan and tells them to pack up; they’re going to D.C. (despite Nate teaching her 'his way' of saying it and Sophie accidentally entering the store closet when she exits, trying to act how Nate does).

At the studio, Parker is trying to get caught rummaging through Monica’s office. When confronted she claims to be from a competing network then leaves, naturally making her suspicious. Parker admits that she’s trying to use Monica’s credentials to get to a source in the Pentagon. She’s after something that will bring down the President of the United States. Later, Parker brings Monica to the apartment where Hardison, who’s posing as some Conspiracy Theorist in his dark lair, lives. Monica is about to walk out, but when she sees Eliot wearing a dark suit and a menacing look she decides to hear him out. Hardison points to his bulletin board, which is covered in photos of military installations, connected by strands of yarn. He says the government plans to replace Guantanamo Bay with a series of secret prisons on the mainland. Parker says her source at the Pentagon is General Mark Chesler, and she was trying to steal Monica’s credentials to get to him, and Monica tells her to call in the morning. A she leaves she calls the studio to arrange a cameraman, and Eliot overhears her saying she intends to take that story for herself, which means she’s hooked. Now they just need to provide her with a source inside the Pentagon.

At the Pentagon, before Monica arrives, Eliot finds the real General Chesler and steals his ID and even stalls him with a certain mission while Nate uses his ID and does a bit of makeover of his office, making it looks like he's General Chesler. Moments later, Parker leads Monica to the office while Monica explains to her about her method of 'interview' and how denial and refusal mean guilt.

Monica: Denial means guilt. Refusal means more guilt. Punch out my cameraman, and I'll kiss you on the mouth. (The cameraman looks at Parker with a grin).

Just then, Eliot walks by, and Monica recognizes him from before, convincing her they have a shadow, and that there’s actually something to it. The camera starts rolling as she knocks on Chesler’s door and Nate comes out and tells her he doesn’t know anything about any prisons when she interviews him, doing all the actions that Monica mentions even pushing the cameraman aside. As he leaves, she props his door open and lets them in. They find documents that seem to corroborate their premise and later she wants Parker to bring her source to her show. However, back at the studio, Monica goes with a different story. Parker and Hardison ask for a reason and she explains that the secret prisons aren’t scary enough, despite it being a national scandal, and adds that it makes people feel safe since they're going to be holding terrorists. What she wants to sell is 'fear'. Sophie decides to give her 'fear' while Nate comments that's how it all started..

The next day, Parker calls Monica from outside a coffee shop she's in telling her there’s more to it, but as Monica watches, a car hits her and Eliot takes a red file that Parker was holding and drives off. Monica is horrified and decides to check outside when Hardison appears and leads her away...as Parker gets up and brushes herself off. Hardison takes her to an underground basement where Nate’s waiting for them, while giving Hardison some "antidote". He tells her that a chemical compound has been released into the water supply and will start affecting people any day now, and that the “prisons” are actually safe houses for the elite and government officials to sit the contamination out in, with independent water supplies. Monica asks for more proof and Nate notes that Parker has it and tells her to find some sources. He gives her the code word “Destiny” and sends her off. Later, the team meets back up and Sophie declares that Monica will be the author of her own nightmare.

Nate: (about Sophie's speech) Do I sound that creepy when I...?
Eliot: Hell yes.

Hardison explains that journalists are lazy and always rely on the same sources like Monica is doing now. He manages to filter out the ones she isn't likely to use, which leaves them with four. Monica sends an email to one of them while he intercepts it, and fabricates a reply that they don't want her to mention this or discuss it. Her last source is a congressman and she asks him about Destiny, who happens to be a stripper he's gone to see a number of times and assumes that's what Monica is talking about. Stunned, he snatches her recorder and practically runs from her, telling her not to tell anyone. Monica is now convinced the conspiracy is real. Going back to her office, she suddenly notices how much water people are drinking and begins to freak out when she leaves the office. The team sees the footage of her freaking out 3 hours ago and Nate comments they might be pushing too hard. Sophie scoffs about it until Monica bangs the door, calling for Hardison. The rest of the team hides in the other room as Hardison opens the door and she drags him off to get some video proof.

At the army base, they manage to find a location that looks like a bunker while Nate is heading there to intercept her but Monica is climbing a fence to get inside while Hardison reluctantly follows her and they get caught by Army personnel. In an interrogation room, while Monica persistently tries to ask the interrogator to spill the beans about the bunkers (but keeps getting the same response of denial), Hardison tells his interrogator that she’s crazy and only met her in a bar. Hardison begins to stall, and even freaks his interrogator, Lt. Abbot, using information that Eliot pulls up on him to convince him he’s actually the one being reviewed.

Nate arrives still pretending to be General Chesler and bluffs his way onto the base. The interrogators question Monica and Hardison until Nate approaches them and compliments them for their effectiveness, then takes the two of them. Unfortunately, the captain has met the real General Chesler and they try to stop them. As they leave, Nate gives the pills to Monica while telling Hardison to take Monica's car out of here. As they are about to leave, the captain stops them but they manage to escape. However, once he hears Lt. Abbot mention Monica Hunter's name, he realizes she looks familiar and calls the police. Back at the apartment, Monica and Nate decide to take the evidence and proof while waiting for Hardison but as they enter, all of the stuff is gone. Monica notices the red file and picks it up, Eliot comes out saying he was just cleaning up, implying he 'killed' Hardison. Nate suddenly seems like he’s been working against her the whole time, telling her he's a patriot, but she sprays him with mace and makes her escape.

Panicked, she heads to the studio to get on the air and break the story. The producer Steve is shocked and asks if she's drunk but Monica decides to do it herself and pushes the reporter for a special report. She announces the fake story that the water has been contaminated not realizing Hardison has hacked into the system with the footage of her jumping the fence and typing the headlines below. Confused and frustrated, Steve goes down and asks the news crew to find out who's doing this. When Monica pulls out the red file to present the proof all she finds are a bunch of papers that read, “ALL WORK AND NO PLAY MAKES MONICA A DULL GIRL.” Steve brings the police over and she starts to panic and gets caught. Steve checks the pills she was holding and finds that they are anti-psychotics. While Monica's being dragged away, Steve realize they're still on air and the only thing the reporter can do is announce Monica Hunter being taken in after suffering a psychotic breakdown live on air.

Days later, Ray Pennington was being interview by a reporter as his good reputation has been restored as the reporter pose a question on how many good people that Monica Hunter ruins. Back at the HQ, the team questions on the footage that being taken being false even some of the 'myths' and urban legends. Nate and Sophie talk about their switch in roles, Sophie admitting that she’s not really sure about herself like she used to be, and needs some time to figure it out. But Nate comforts her that she did a good job running the con and have fun.