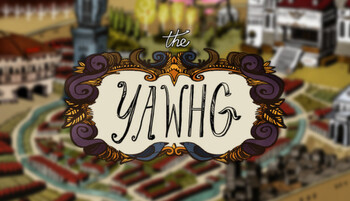 The YAWHG will be here in six weeks. ...and no one expects it. Not a one of us. We just keep on living our lives, week by week, unaware...
Advertisement:

A Story Branching game with RPG Elements, The Yawhg

was created by Emily Carroll and Damian Sommer. The player can take control of up to four different citizens as they go about their lives, blissfully unaware that in six scant weeks the YAWHG will arrive. Depending on how they spend their time, and how they cope with the random events thrown their way, they can build up their Physique, Finesse, Mind, Charm and Magic, and earn Wealth.

But how will they cope when the YAWHG appears...? Will the skills they honed beforehand help them survive?