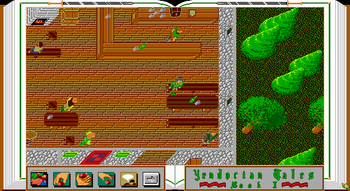 Yendorian Tales Book I is a top-down role-playing game released in 1994. It was published by Spectrum Pacific Publishing and developed by SW Games.

The island nation of Yendor is having problems. Monsters plague the land and various nobles are on the brink of war. This has to be dealt with quickly by a brave adventurer of some sort, and in fact the Society of Wizards is willing to aid one in ridding Yendor's problems. The wizards have their own agenda as well, they need to recovery the stolen orb of the wizard, Zamora.

Yendorian Tales Book I is an overhead view fantasy role-playing game. The player can create and control a party of up to six characters belonging to a variety of classes. Interaction with the NPCs is performed by typing in conversation themes, similarly to Ultima games. Combat takes place on separate screens; the player-controlled party and the opponents move on the battle screen in a turn-based fashion.