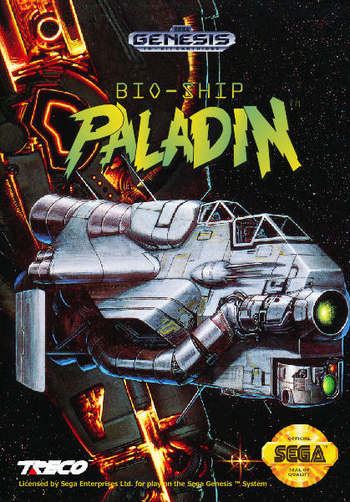 Bio-Ship Paladin (Japanese title: Uchuu Senkan Gomora, "Space Battleship Gomora") is a Horizontal Scrolling Shooter by UPL released for arcade in 1990 and for Sega Genesis in 1991. It's a fairly average shooter except for a rather unique feature; a point defense gun. That is, as well as your main guns which fire forward, you have a cursor which you can use to fire explosive blasts at any place on screen, in a very similar way to Missile Command. This allows you to use firepower defensively, by shooting down enemy projectiles before they can hit you, which is very rare in shmups. It also lets you target enemies and even parts of enemies selectively.
Advertisement:

The plot begins on the planet Atlantal, an earth-like planet in a distant system. Directly before the events of the game, a huge fleet of space ships appears and attacks the planet's largest city, Delila. With no communication with the enemies, the Atlantalites declare them The Aggressors. The Aggressors start attacking past the planet and spreading past the "Galegino Path" some sort of spacial sea of flame that may be a star. To counter this Aggressor invasion, a two-seater bioship is produced that is capable of growing stronger and larger(the Paladin from the title) and sent out to stop the invaders.

It is much slower paced than most shooters, probably because of the point defense, which requires the player to be able to intercept incoming fire in time.