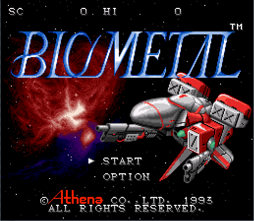 It's the year GC 232 (Galaxy Century Year 232). A huge war that had begun years and years before has divided the Milky Way and all of its natural resources have been exhausted. The Milky Way Galactic Council is forced to send a fleet of starships to a nearby planet by the name of UP457 in search of any resources that can replenish the ones lost during the battle.

However, during this mission, the fleet is destroyed by a race of half machine, half animal aliens referred to as "BIOMETAL" by the Galactic Council. One of the Council's super computers then calculates that the number of these "BIOMETALS" is increasing rapidly and will have the Milky Way completely taken over within 32 hours. So the Halbard, along with their fleet, WASP, are assigned to eliminate the hostile threat on UP457.

Weapon power-ups are gained by destroying pods and picking up the released power-ups. The player also has a Deflector Shield in the form of four spinning orbs that circle around the ship when the engaged (Known as the Gel Analog Mutant, a.k.a GAM). Charge power is drained when the GAM is active.

BIOMETAL is unique in that its soundtrack for the European and US versions was entirely created by techno group, 2 Unlimited (the selections used for BIOMETAL were remixes of songs from their 1991 album, "Get Ready!"). The Japanese version of the game featured an entirely different soundtrack which suits the dark mood better.

Not to be confused with the Biometals from Mega Man ZX.