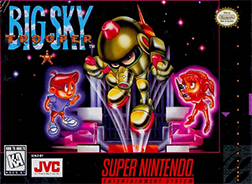 "If there's anything I HATE... ...and﻿ WILL NOT TOLERATE... ...It's BONES and ADVERTISING!"
— Slug Leader
Advertisement:

A 1995 sci-fi Action RPG developed by LucasArts for the Super Nintendo in which you play as a kid who instantly gets promoted to a 21-star general in the Siderian Space Army. He or she must battle the evil Space Slug army led by the Sultan of Slime, who has declared war on humanity.

This game is set in a top-down perspective, and uses the same Game Engine as Zombies Ate My Neighbors. You fly on the E.S.S. Dire Wolf — which is run by the dog-like Flexible Interactive Digital Omnicomputer, or FIDO — and you must complete various missions while killing off slugs on the planets. When you arrive on a new planet, you fight off aerial slugs Asteroids-style, and you then must fight the slugs on the surface before you can go to the next. Along the way, you can acquire new weapons, ship upgrades to access new galaxies, and items. One of these is the ability to set up fast food stations (slugs hate advertising, and fast food is a form of it), which guarantees you that the slugs will never return to that planet again.