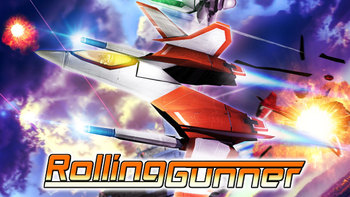 Rolling Gunner is a 2018 doujin Shoot 'em Up created by Mebius. It was later ported to the Nintendo Switch the following year.

In the year 2034, the metallic element "Busterium" was discovered at the bottom of the Pacific Ocean by Lerman Matsunaga, a multinational corporation, and the world had greatly changed. As a result of Busterium, "Buster Engines" were created, along with the central supercomputer "Bustersystem All Controller", or BAC. However, in 2061, BAC suddenly becomes haywire and declares war on all mankind, using the Buster Engines to create various machines under its control. BAC had quickly taken over the planet, and half of the world's population was reduced. But a group within Lerman Matsunaga had learned about the dangers of BAC and Buster Engines, and created an anti-BAC weapon called the "Rolling Gun". Soon, the ship that had wielded the Rolling Gun, Anti-BAC Suppression Independent Control Armament "Rolling Gun" Deployment Warship RF-42R STORK, was rolled out. Humanity then begins "Operation Downfall", a final mission to destroy BAC once and for all. But things won't be easy, as BAC had already taken over Lerman Matsunaga as its fortress.

An upcoming patch, Over Power, was soon announced

. In addition to making the game slightly harder, there will also be a new bullet canceling mechanic, as well as an arranged soundtrack.

Has no relation to Rolling Thunder.