Useful Notes / Republic of the Congo

The Republic of the Congo (French: République du Congo) is a country in Central Africa, bordered by Gabon, Cameroon, the Central African Republic, the Democratic Republic of the Congo, the Angolan exclave of Cabinda, and the Atlantic Ocean, in clockwise order. Despite having a nigh-identical name to its eastern neighbor the DR Congo, most people wouldn't have a problem differentiating them, simply because not many know that it actually exists. Take it as the Lesser Star of the two Congos. In seriousness, the country has a (relatively) simpler history than the infamously chaotic DR Congo, although its problems should not be glossed over, either. In journalistic, the country is often referred to as "Congo-Brazzaville" (after the capital), contrasting it with the DR Congo's "Congo-Kinshasa".

Formerly inhabited by the pygmies, then the Bantus before the Europeans moved in as an Outside-Context Problem to both of them. The prominent Bantu group who live in the country is (you guessed it) the Kongos, complemented by the Sanghas and the Tekes. The French began to expand their colony into the interior in the 19th century, eventually subsuming the Bantu kingdoms under their rule. The region was made the colony of French Congo, and, together with French Gabon, French Chad, and French Oubangui-Chari (the present-day CAR), made the French Equatorial Africa, with Brazzaville as its capital.

During World War II, Congo took a spotlight when the Free French government made Brazzaville the symbolic capital of the French Colonial Empire after the fall of Paris, although London was de jure the capital-in-exile. The capital was eventually moved to Algiers, but Brazzaville remained important as the site of the Brazzaville Declaration, which made significant reforms to the administration of the French colonies to be implemented after the war (especially after France's notorious implementation of hard labor on the Congolese people in the followup to World War I).

The country became independent in 1960 with Fulbert Youlou as the first president, but he was ousted by Alphonse Massamba-Débat, who was fiercely left-leaning and established "scientific socialism" as the country's principal ideology. Massamba-Débat himself was deposed in a coup in 1968, to be succeeded by Marien Ngouabi, who renamed the country into the "People's Republic of the Congo". Ngouabi was eventually assassinated, but his successors continued the left-leaning ideology, including the country's current president, Denis Sassou Nguesso, who first took power in 1979.

After The Great Politics Mess-Up, Nguesso had to allow opposition to finally stand in party elections. Pascal Lissouba became the first democratically-elected president in the 1992 general election, but Nguesso continued a rivalry with him until it degenerated into a civil war in 1997 that claimed thousands of deaths. The war only ended when Nguesso took the helm again...to the present day.

Like its neighbors, it has large reserves of oil and mineral, which the country has generously tapped on, making it one of Africa's wealthiest countries, though not as many people have received this incentive as expected. Its relative stability has allowed it grow on, though, avoiding the pitfall of its eastern neighbor. 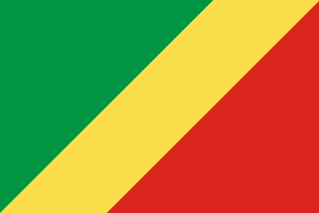 The tricolor contains pan-African colors as used by Ethiopia: green, yellow, and red. Green represents agriculture, while yellow represents the friendship of the Congolese people. The red, however, has no particular meaning; it was probably a leftover of the Congolese flag during the Cold War era, which was stuck-up red with the socialist star and sickle and hammer in its canton. In this case, the red represents the revolution of the people.