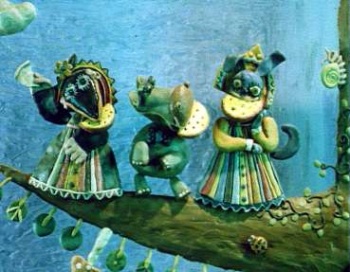 A Soviet claymation animated short made in 1981 by Aleksandr Tatarskiy. It's divided into three unrelated segments: "Picture", "Game" and "Or maybe, or maybe...".

The last segment, that gave the name to the entire short, and the most remembered, is a parody on Aesop's fable The Fox and the Crow (more specifically Ivan Krylov's version). The narrators try to tell the fable, but keep confusing things. The visuals reflect the resulting story.