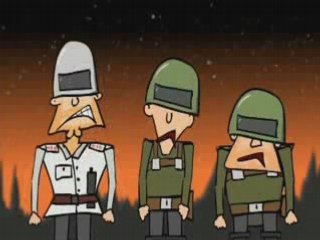 The titular hero and his ANNOYING space patrol squad.
Kapitan Bomba (lit. Captain Bomb) is a Polish Vulgar Humor cartoon series about the titular captain and his crew, who are defending the galaxy from aliens. Many creatures, planets or even weapons in the series are shaped after genitals; some species even smell like crap for no known reason. Characters are speaking in a Cluster F-Bomb way, of course - at one point, Bomba eventually punishes his soldiers for being polite, and forces them to use foul language. He also refers to them as "dumb dicks" (tępe chuje); fallen enemies are also insulted that way.
Advertisement:

Unsurprisingly, the series was strongly attacked by Moral Guardians (and not only them) for big amount of vulgarity during its premiere; now, however, it has reached cult status among many Poles.

Some episodes have been translated into English.