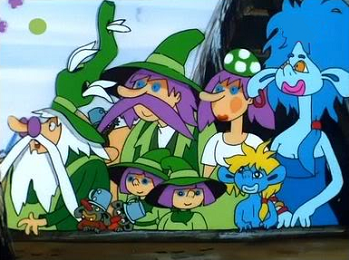 Some of the colours not included.
"He is a child, but he's older than his parents. When Marbas will lift his hand at him, he will be left alone with himself, duel with himself, and lose that fight. Then, a hand many times smaller than his hand will turn Hellberg upside-down, and it will cease to be The Reversed Mountain."
— The prophecy of Marbas' downfall.
Advertisement:

The Reversed Mountain, or Dreadfully Titled Movie (pl. Odwrócona Góra, albo Film Pod Strasznym Tytułem) is a Polish animated movie created in 2000 by Jerzy Niemczuk and Leszek Gałysz. It is based on their 13-episode long animated series from 1996, which itself is based on their book, Dreadfully Titled Tale. It tells the story of a magic shapeshifting creature Wił from Tapo Mountains, and his struggle to defeat the evil knight-like Marbati. Escaping from captivity with the help of a gigantic tornado, Wił and three little creatures called Plonki get cast to the farmhouse of Mamuna, Tatun, their son Sonek and grandpa Lesawik. Hilarity Ensues. But the situation becomes dangerous. Hearing of an ancient prophecy that a child will defeat him, Marbas, the leader of the Marbati, orders all children from the land he conquered to be captured and delivered to his castle Hellberg.

The book, series and movie contain the following tropes: