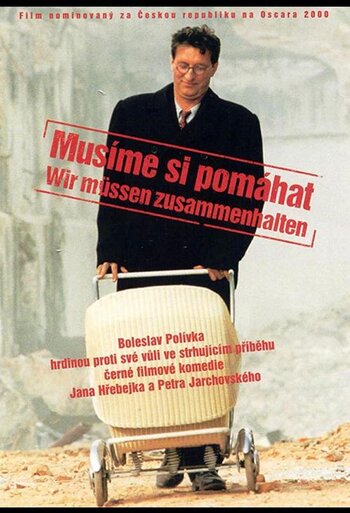 Divided We Fall (Musíme si pomáhat—"we must help each other") is a 2000 film from the Czech Republic, directed by Jan Hřebejk.

Czechoslovakia, 1943, under Nazi occupation. Josef Čížek is a Czech man who used to work in a factory, until he injured his leg in an accident. Now he loafs around at home. He and his wife Marie get along about as well as it is possible to get along while there are Nazis all over the place. They are occasionally visited by Horst, a Czech of German ethnicity who now collaborates with the Nazi occupiers. Horst is superficially friendly with Josef and he does sometimes look out for Josef and Marie, but in the pre-war days, Horst was Josef's subordinate at the factory. Now Horst enjoys lording his status over his former boss. Horst also lusts for Marie.

The factory where Josef and Horst worked was owed by the Wieners, a Jewish family who were dispossessed when the Germans occupied Czechoslovakia in 1939. In 1941 the Wieners were sent off to the Theresienstadt concentration camp. Two years later David, the Weiners' son, escapes and makes it back home. He reports to Josef and Marie that the supposedly comfortable camp at Theresienstadt is merely a way station to the camps in Poland, where the Jews are being exterminated. A horrified Josef decides to hide David in the storage room of his apartment, but it will not be easy to keep him hidden, not with Germans all over the streets and Horst constantly barging into the apartment and looking to get into Maria's pants.