Animation / David and the Magic Pearl 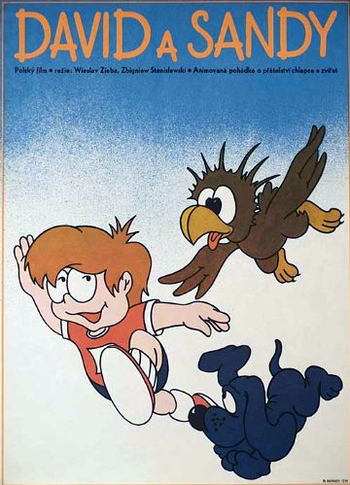 David and the Magic Pearl is an obscure Polish/Swedish animated film released in 1988. It's about a young kid named David who moves in to his vacation house in the jungle during summer along with his tobacco-addicted father and his oddly large-breasted mother, soon after, a series of strange events start unraveling.
Advertisement:

A bunch of tiny, shiny, egg-shaped aliens called Spacers arrive at the jungle looking for a missing MacGuffin called a magic pearl, all while Fawn the poacher and her bumbling gorilla sidekick are out to catch as many animals as they can while looking for the Spacers and their pearls so they can please their boss, Mr. Stealmore, and get filthy rich. So David, along with his beagle Pips and a stray eagle chick David calls Sandy, set out to free the animals of the jungle, help the aliens find their pearls before Stealmore can and save the jungle from being destroyed.