Using less of your powers does not make you powerless.
— Tagline 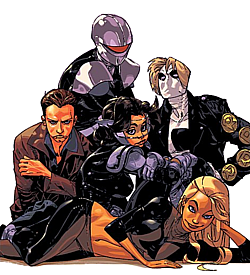 The Loners was a Marvel Comics miniseries written by C.B. Cebulski and drawn by Karl Moline. Spinning off from Runaways, it tells the story of Excelsior, a support group for former teen superheroes, as they deal with a handful of supervillains and their own personal problems. Originally planned as a twelve-issue series, it was cancelled after just six issues.