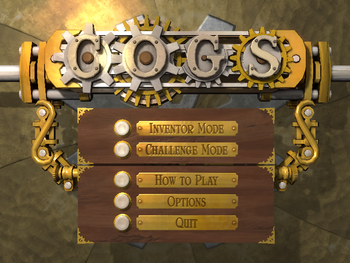 Cogs is a sliding tile Puzzle Game with a Steampunk aesthetic, developed by Lazy 8 Studios and released on April 14th, 2009. It was ported to the mobile devices a year later.
Advertisement:

The goal is to complete various contraptions by sliding tiles with gears or pipes into place using as little time and few moves as possible. It also contains challenge mode, which has speed trials and levels with limited moves.

No relation to the other puzzle game from 2009 named Cogs, which is free and is [[ available]] on Kongregate.