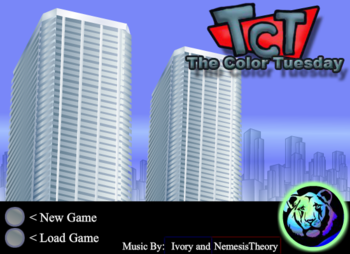 "To anyone who can know the bitter sweet taste of the word 'November,' may we forever bask in the softest shade of the color Tuesday."
— Intro to the game
Advertisement:

Also known as The Color Tuesday, TCT is an Eastern RPG on Newgrounds (and other sites) designed by Robert Lee, (webname; Grawsie).

The game centers around Childhood Friends Alex and Kyle, who, after being drawn by a beautiful melody into the woods in the dead of night, meet a woman that tells them about the Others, evil creatures that can influence adults to do their bidding. The children are also told that they are destined to save the world from the Others and only they are free of their influence. To defeat their enemy, they must use their special powers driven by imagination.

The game is set in an ostensibly modern setting, with lots of inspiration coming from Earthbound. The Color Tuesday comes from one of the characters Color Synesthesia,

or the association of certain words, letters and numbers as having distinct colors.