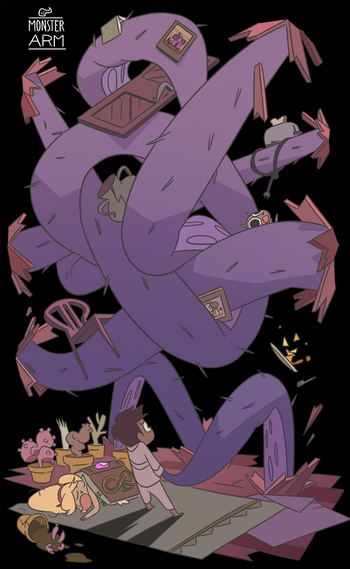 While training for a big karate tournament, with the goal of harnessing the powers of inner peace and self control to kick his rival Jeremy's butt, Marco ends up breaking his arm trying to chop three boards at once.

He attempts to have Star heal him with magic, but unfortunately, Star does not know any bone healing magic. She consults her wand's magic manual—a giant, musty, disorganized collection of personal notes from her ancestors and former wielders of the wand—and manages to find a bone healing spell. (Or at least she thinks it's one. It's in an ancient language.)

Star casts the spell, and ends up turning Marco's broken arm into a giant, mutated, and monstrous tentacle. She attempts to cast a reverse spell, but at Marco's insistence, test it out first. Star proceeds to perform a long, long series of trial and error on numerous potted plants, while Marco tries to adapt.

The next day starts out rather horrible for Marco: he wakes up and accidentally smacks himself in the face with his slimy monster arm; the arm keeps knocking everything away as he's trying to take a shower, along with turning the water dial all the way to hot, scalding him; and at breakfast, it keeps smacking his cereal away and smashing his glass of orange juice on him.

Star arrives in no better shape; she'd stayed up the whole night practicing the counter-spell to limited success. She promises, however, that she'll figure it out eventually, and the two go to school.

At lunch, the monster arm situation hasn't improved, though Marco's become adept at keeping it away from his lunch tray. Just before they can find a seat, however, Echo Creek's resident bully Lars is seen terrorizing an unfortunate victim but knocking down his lunch, pushing his face into his pudding, and regaling him with his awful (lack of) humor.

Before Marco can react, the monster arm smacks Lars in the face. At first indignant and violent Lars is quickly beaten up and runs away crying. Marco and his monster arm are regaled as heroes, even earning the attention and praise of the school's most popular girl and Marco's crush, Jackie Lynn-Thomas. His opinion on the monster arm changes dramatically, as does the arm's uncontrollable nature.

Later, Star has finally figured out the counter-spell and excitedly goes to Marco to give him the good news. However, Marco's no longer thrilled to hear it. Having gained full control of the monster arm, he now plans to take it to the karate tournament and use it to kick Jeremy's butt. When Star mentions that it's cheating, Marco suddenly turns hostile and shoves her out of his room.

The door shuts, and Marco says about what does she know of the arm when the Monster Arm suddenly grows a mouth and gains a voice, and starts telling him he doesn't need Star; with the Monster Arm, he can do so much more, like beat Jeremy to a pulp, win the heart of Jackie Lynn-Thomas, and slaughter all of humanity and devour their bowels! Uh, it meant, win the karate tournament!

Thus convinced, Marco brings the monster arm to the tournament. His rival, Jeremy, comes as expected, and is revealed to be little more than a spoiled brat of nine years of age.

In the stands, Star arrives looking like a zombie. Marco's two friends voice their concern, and Star explains that she'd been up for two days straight figuring out the counter spell for Marco's monster arm—along with staying awake to attend Marco's tournament, because he's her earth bestie.

The tournament begins, and as expected, Marco effortlessly beats the ever loving daylights out of Jeremy. It's all going according to plan until the monster arm picks up the beaten Jeremy and prepares to devour his bowels. Horrified, Marco tells it it's not part of the plan he had in mind. Unfortunately, the monster arm decides to turn against him for stopping the arm from eating Jeremy's bowels!

Marco struggles to subdue the monster arm, all while calling for Star to cast the reverse spell. Unfortunately, Star's finally fallen asleep from her extended research bender; Marco's friends frantically try to wake her up. All the while, the monster arm keeps giving Marco pain!

Eventually, Star is woken up, and after a brutal struggle between Marco and the Monster Arm, and with the help of many misfires and objects turned to human arms, the counter spell is cast and the limb starts to go back to normal. It utters a disturbing warning, however:

You can't get rid of me, I'm a part of you now! You can treat the symptoms but you'll never cure the virus...!

Cryptic parting words aside, Marco's arm is back to normal! And back to being totally broken.

With Jeremy knowing that Marco's arm is broken, Jeremy has won the tournament! ...Until a pair of gold, diamond-encrusted knuckles falls out of his glove, and their Dojo master noticed it. Having brought shame to strip mall dojos everywhere, the two are immediately disqualified.

Marco worries about the monster arm's parting words, but Star tells him not to worry. But for how long?