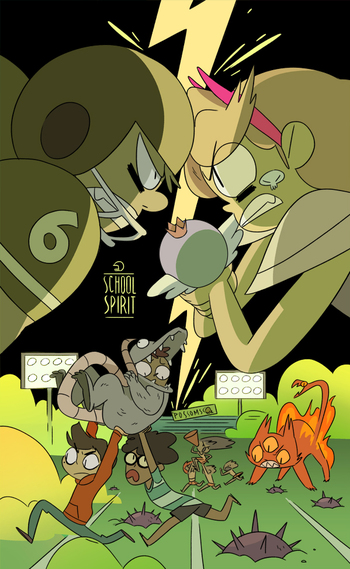 Echo Creek Academy's football team, the Awesome Opossums, has an upcoming game against the Silver Hill Warriors. The team's mascot, an opossum, has recently died, so Marco's friend Ferguson dresses up as one to support the team (he's really doing it in an attempt to pick up chicks, thinking he's impressive even through he's fat, dorky, and clumsy).

When Marco describes how every year the Warriors "slaughter" the Awesome Opossums, Star takes it literally and thinks football is like a ritualized war. She asks Marco for advice on how to prevent the slaughter. Marco, who admits he has no real clue about football, spouts some random natter involving throwing bombs and offense. Star tries to join the cheerleading squad to coordinate them into defending the team, but the head cheerleader thinks she's a weirdo and bans her from the team. So she decides to do it herself.

Meanwhile, since every year the Warriors steal the opossum before or during the game, Marco suspects that they will try to kidnap Ferguson. He insists Ferguson stay with him at all times and won't allow him to go home, to his chagrin.

As the game begins, Star reveals that she rigged the entire field with booby traps to destroy the Warriors. Horrified, Marco explains that football is just a friendly game. Star realizes she made a mistake, but its too late. The Warrior trigger the traps, which include bombs, trap doors, and mechanisms that release monsters. Star and Marco leap onto the field to help them. As soon as they do this, two Warriors grab Ferguson and try to drag him away, but are stopped when they step on landmines.

Star and Marco defeat all the monsters. The Warriors are terrified of what just happened and run away, causing the Awesome Opossums to win due to the other team forfeiting. Star, Marco, and Ferguson are cheered by the school. Just as they think everything is fine, Marco is suddenly carried off by a flying monster that they missed.