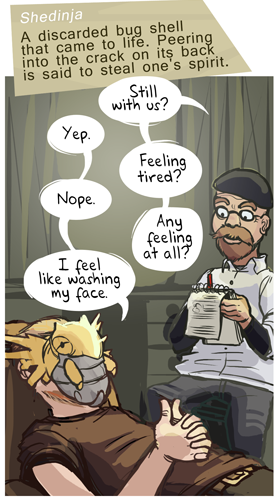 DEXBUSTED!
"I sometimes forget that this comic obligates me to draw pokémon as well, not just people."
— Bumbazzle. [1]

Rare Candy Treatment is a Pokémon webcomic by Bumbazzle / Bummerdude. It's named after an item in said games, the Rare Candy, by playing with the idea of it being an addictive drug. (therefore requiring treatment)

"But wait, how is this any different from all the other Pokémon fan comics out there?" You may ask, and to answer your question, we'll present you the three key points of this webcomic: the first, its serious drawing style, the second, Black Comedy, and the third, the great focus on the trainers (instead of the traditional focus on the creatures). These three things together actually give the comic series a certain Mood Dissonance with the usual Pokémon friendly and nice atmosphere, which, all things considered, ends up being quite enjoyable, and has certainly contributed to the comic's great popularity.

But alas, children, all good things must come to an end (except for pizza, pizza will always be there), and, as of 20 June 2014, the webcomic has ended, due to author having done everything he wanted to do with it. This was then followed the comic's original site expiring, meaning you can now only read the comic thorough the author's DeviantArt account

, through the comic's mirror

on Smack Jeeves, or though the original site's unusually thorough archive

on the Wayback Machine, which has hundreds of different snapshots for individual pages.

This comic contains the following tropes