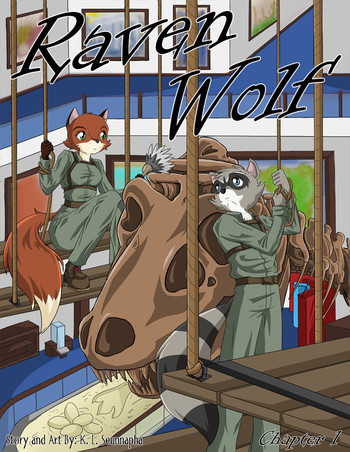 Eve: If he really is over three hundred years old like you say, then why aren't there studies being done on how he's able to survive so long while looking so young? People would pay millions for this knowledge! So why exactly... are we relating him to the end of the world...?
Scientist: Because of some old baseless belief the funders of this project have. "Those who are born with eyes of white are ones with the gift to see the future".
— Raven Wolf, The Wilds, Part 01, p.25

Raven Wolf is an Animesque Webcomic adapted from the eponymous novel series by its creator, Kura L. Seunnapha.

The action takes place on Earth after our civilization got wiped out by global environmental disasters followed by a 10,000 years-long glaciation. The world left afterward was so hostile to humans that animal spirits helped them by offering to transform them into human animals. Most of them accepted, but they soon split into two sides as one soon tried to rebuild the civilization (the domestics) while the other decided to keep to respect nature (the wilds). Both domestics and wilds, thinking their respective side is the best, quickly grew hateful of each others.

The story begins in the domestic city of Cordella when Yula, a childlike 300 years old white-eyed wolf kept as a test subject by the domestic military, has witnessed in his sleep an event having happened the same night. Eve Cadrey, a domestic vixen scientist working at the familial museum and studying Yula, tries to understand why. At the same time, his security guard, Teddy Conner, is transferred to guard a new test subject, a white female wild wolf named Iuana and daughter of the leader of the Raven Wolf tribe. Adventure ensues.

You can start to read it here.