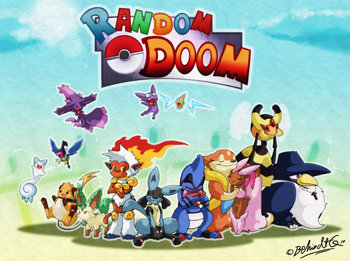 on DeviantArt about a Pokemon trainer named Elisa (formerly know as Jenna), but more importantly about her various Pokemon that she owns. The series started as single gag comics but expanded to have several well developed characters and stories. The series was expanded into a proper story. At the moment, Random Doom consists of:

Also, for a collection of assorted fan works, it's popular. Really popular. To the point where Random Doom's comics have managed to gain the following of 7 running fan translations and have led to the creation of a small body of its own fan works, including this story, "The Toxicroak Prince,"

which was made canon.

On November 9th, 2012, the author has announced a revamp into the main series, due to many loopholes and mistakes she made about the timeline and the characters as well. As a result, every character had its story revised and even small edits happened in the first chapters to make everything more consistent to the ongoing story.

On April 23th, 2018 the comic creator has announced that the series has, more or less, come to an end

with its final story arc 'Many Happy Returns' having ended with a Distant Finale, with even the random strips finally coming to an end.

They can all be found here