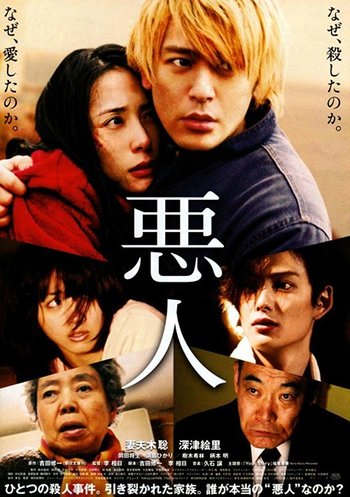 Akunin (Villain) is a 2010 Japanese film about a murderer and the ordinary young woman who loves him. Shimizu (the titular "villain") is a troubled young man with a difficult home life; when Yoshino, a shallow and manipulative girl he's in love with, ditches him to go off with the richer and prettier Masuo, he follows them and kills her. As he's going on with his daily life, trying to avoid suspicion, he receives an e-mail from a desperately lonely woman, Mitsuyo, who found him through a dating site. The two arrange to meet and soon strike up a romantic relationship — if not a very healthy one. And then the police come looking for Shimizu...

Not to be confused with Boris Akunin. Nor the British gangster film.