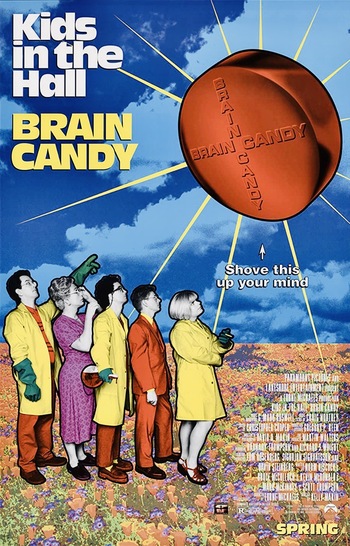 The sweet pill that makes life bitter.
"Shove this up your mind."
— Tagline
Advertisement:

After the end of The Kids in the Hall, there was one last project that the eponymous troupe wanted to perform: their own feature film. Brain Candy was the result.

Released in 1996, the film tells the tale of one Chris Cooper, a pharmacist who works with his love, Alice, trying to create the world's greatest antidepressant for his employer, Roritor Pharmaceuticals. It also details the lives of several people with serious mental and emotional issues — like death metal musician Grivo and repressed homosexual Wally Terzinsky — who eventually get put on this new antidepressant, called GLeeMONEX. The drug is rolled out as Chris pushes it to keep from getting fired. And at first, everything is comically okay.

Until it's revealed just why you don't want to rush an antidepressant out the door.

With mixed personal sentiments about the film, the troupe went their separate ways until their reunion in 2000, subsequent tours in 2007–08, the 2010 Death Comes to Town miniseries, and their 2022 revival.