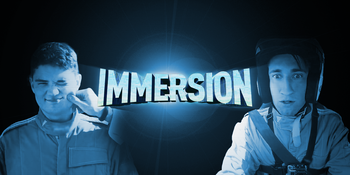 Immersion is a Web Original series created by Rooster Teeth Productions. In it, Burnie Burns determines that many things that are taken for granted in Video Games - gaming's own tropes, if you will - simply don't work in real life.

Or do they? With the help of his set- and costume-designer friend Griffon Ramsey, he decides to go and test scientifically if some of the things in video games are in fact possible, like a gamer's MythBusters.

The first season involved Burnie and Griffon working together to explain and set up the experiments, with Griffon's husband Geoff Ramsey and his friend Gus Sorola, also both longtime members of Rooster Teeth Productions and cast of Red vs. Blue, acting as the Lab Rats - usually getting themselves hurt somehow.

Then in a visit to Supanova with Gavin Free, Burnie confirmed that they would be shooting a new season in late 2012/early 2013... and the people acting as the new Lab Rats would be Gavin himself, as well as Michael Jones. Shooting was confirmed to have started in Spring 2013, for a presumed summer release.

Season 2 commenced on May 22, 2013, with the release of the episode "Simulation Racer", before settling into a regular schedule in April 2014. The season concluded a year after its start, on May 29, 2014, with the "Trials Fusion" episode.

A third season was announced in April 2015 and premiered on November 1, 2015. This one features a rotating cast of five scientists and six lab rats, including the writing team for RWBY and had much more elaborate experiment set ups. Starting from '"Five Nights at Freddy's in Real Life"', there are bonus episodes that features another pair of Lab Rats playing the course.

Find all of the Seasons here

on the RT Site.