Film / While the City Sleeps 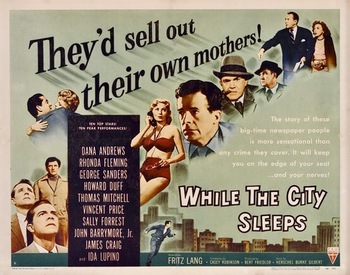 They sure would.
Advertisement:

While the City Sleeps is a 1956 Film Noir crime thriller directed by Fritz Lang and featuring a star-studded cast. It was adapted from the 1953 novel The Bloody Spur by Charles Einstein, itself loosely based on the case of real-life murderer William Heirens.

New York City media mogul Amos Kyne (Robert Warwick) dies, leaving his empire to his playboy son, Walter (Vincent Price, not yet typecast as a creepy horror movie star). Walter, wanting to change personnel without getting his hands dirty, creates a high-ranking position and makes his top three men compete for it. The catch is that they have to try and solve the sensationalist case of the so-called Lipstick Murderer. There's Mark Loving (George Sanders), Jon Griffith (Thomas Mitchell), and Harry Kritzner (James Craig), ready to vie for the position. Loving has Mildred (Ida Lupino), a reporter and occasional lover, as an ally; Harry is currently sleeping with Walter's wife, Dorothy (Rhonda Fleming), who he hopes can influence his boss; Griffith wants Ed Mobley (Dana Andrews), columnist and Pulitzer Prize winner, on his side, but Ed doesn't want to involve himself in the battle.

However, Ed's connections make him useful, and he decides to help Griffith. Ed's girlfriend, Nancy (Sally Forrest), is Loving's secretary and is willing to help to find the killer as well at the expense of her own safety, as part of a plan that Ed concocts with police lieutenant Burt Kaufman (Howard Duff).

While the City Sleeps demonstrates the following tropes: