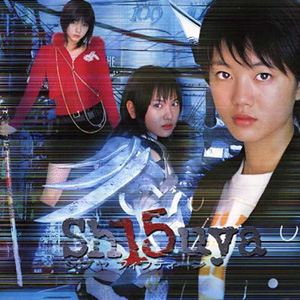 This is Shibuya but it is not Shibuya.
The people who live in this virtual world are the "Shibuya 15".
The only thing real is the pain.

A twelve-episode J-drama from the producers of Kamen Rider that aired in 2005. The title is pronounced, "Shibuya 15".

A fifteen-year old boy named Tsuyoshi wakes up in an alleyway of Tokyo's Shibuya district. He has no memories, and finds that he is trapped within the borders of Shibuya by some mysterious power.

He soon discovers that there are others like him who cannot leave the confines of Shibuya. Despite this, they live seemingly normal lives fighting in a three-way gang war over territory... except when they break one of the unwritten laws of the world, at which point they become "broken" and marked for death by a mysterious assassin named Piece. Once dead, they are reset into the world with a new name and identity, with their former self erased from the memories of the other inhabitants.

Tsuyoshi is one of only two people who remember the former selves of those who are slain by Piece. The other is a girl called Ema, who is the only one able to temporarily kill Piece and protect the Shibuya 15. Together, they seek to find a way to recover Tsuyoshi's lost memories and escape the virtual Shibuya.

Not To Be Confused With the other amnesiac stuck in Shibuya.