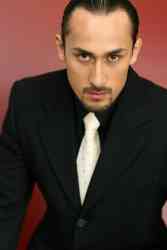 Masaru Edward Fulenwider-Musashi (born April 26, 1977), better known as Mark Musashi, is a Wushu martial artist and stuntman/actor working mostly out of Japan. Born in Rikuzentakawa, Iwate, Japan, he was raised in Maine and graduated from Dartmouth College with a major in East Asian languages and a minor in theatre, studying the martial arts in China for one year of his collegiate career. He eventually moved back to Japan and started work as an underwear model before breaking out into Japanese media as a stuntman and eventual actor.

Most of his work on TV was as a stuntman and actor for various tokusatsu shows, such as Kamen Rider and GARO. He is best known amonst western fans for his role in Cutey Honey The Live as Duke Watari, a bilingual, short-tempered, foul-mouthed member of Panther Claw; and in Sh15uya as Piece, the non-sequiter-spouting serial killer.

He has also performed motion-capture work for video games, such as Metal Gear Solid.