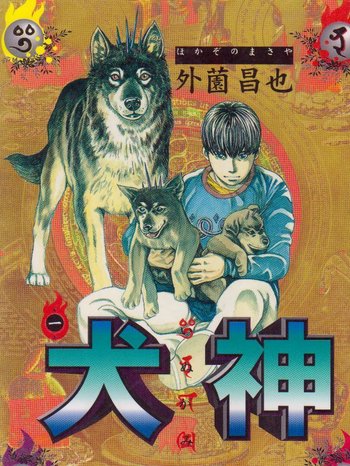 Fumiki Shimazaki wants to be a poet. And if not, he wants to die.

Or so he says, as a simple Japanese student cruising through his day-to-day life, having grown complacent with the world around him. While his classmates prepare to move on into their adult lives, Fumiki is content to hide away in a long-abandoned factory and hone his craft in poems, wishing for the world to drastically change.

During a writing session, Fumiki encounters something he can't quite make sense of; what appears to be an extinct Japanese wolf that is not only disarmingly friendly and even enjoys hearing poetry but, as he soon learns, is far more than meets the eye. The wolf, dubbed "23" after the number grafted into his left ear, possesses a slew of fantastic abilities and is even able to speak, but despite all this, 23 himself is mysteriously clueless as to what he truly is or where he came from. The only concrete memory he possesses, is a command of unknown origin: "Observe mankind."

The quest to decipher 23's true nature & objective soon unravels into a quagmire of esoteric cultism, corrupt pharmaceuticals, and plenty of Gorn. All the while, Fumiki and 23 must rely on each other to survive, but things only become more complicated when they realize 23 may not be the only one of his kind...

Inugami (犬神, "Dog God" or "Dog Spirit") is a horror/fantasy manga written and illustrated by Masaya Hokazono. It was serialized in Kodansha's Gekkan Afternoon from 1996 to 2002 and has been released several times over the years, most recently as Inugami Kai which has some redrawn art and bonus materials absent from previous releases. It has never officially been released in English, but scanlations can be found online.